A group of teens and adults from Holy Spirit Catholic Church in Mims will be attending World Youth Day from July 22 to August 1 of 2016 in Krakow, Poland with Life Teen International. 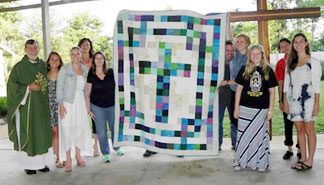 A group of teens and adults from Holy Spirit Catholic Church in Mims will be attending World Youth Day from July 22 to August 1 of 2016 in Krakow, Poland with Life Teen International. Life Teen is an organization whose goal is to lead teens closer to Christ. They will fly into Warsaw, the capital of Poland, and stay for one night before traveling on to Krakow. The proposed itinerary includes a trip to Auschwitz; a possible visit to Wodawice, home of St. John Paul II; a visit to Jasna Gora monastery; Stations of the Cross with the Holy Father; a vigil Mass, and much more.

In early July, the pilgrims made a quilt, which they plan to raffle off as a fundraiser for their pilgrimage to World Youth Day. Teens, chaperones, and parishioners all came together for the project. Dawn Haun, a local quilter, volunteered to lead the project and teach the teens and adults how to sew. It took the group about nineteen hours total to complete the quilt. The fabric for the quilt was donated by parishioners and local quilters.

Kellene Murdick, the fundraising coordinator for the trip, said: “One of the goals of the quilt project was to allow the teens and chaperones to participate in a team building activity before traveling abroad together.”

The quilt was blessed by Father Andrew Wojtan on July 18. Father Andrew, who will be joining the group on the pilgrimage to World Youth Day, says he hopes for the teens to grow closer to Jesus. 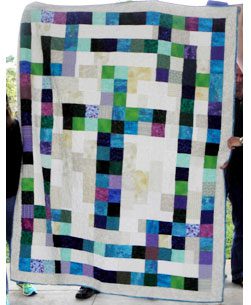 Eden James, a junior chaperone, said: “I love to travel. I always have, even from a young age. I’ve always been curious to experience World Youth Day, especially after the death of Saint John Paul II. He has always been someone I admire. I loved the energy and effort he put into making teens feel important and how he dedicated a special day to us. He gave us the opportunity to show our faith and share it with people around the world. It’s a big deal.”