Mission Helpers of the Sacred Heart Celebrate 125 Years of Service

Mission Helpers of the Sacred Heart Sister Judy Waldt, with catechist Tim Green, teach students who are in preparation for the Sacrament of Confirmation at St. Patrick Parish in Mount Dora. Sister Judy is the Director of Faith Formation at the parish. Photo by Katherine Laguna. 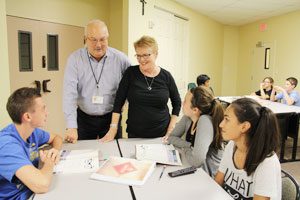 At St. Patrick Parish in Mount Dora, Mission Helper of the Sacred Heart Sister Judy Waldt is the Director of Faith Formation. The path to her vocation began in Baltimore, Maryland growing up in a family with six brothers and one sister. Her family was active at St. Francis of Assisi Parish and she attended Catholic school along with her siblings.

Mission Helpers of the Sacred Heart Sister Judy Waldt, with catechist Tim Green, teach students who are in preparation for the Sacrament of Confirmation at St. Patrick Parish in Mount Dora. Sister Judy is the Director of Faith Formation at the parish. Photo by Katherine Laguna.

“It wasn’t like we prayed the Rosary every single night which is not a bad thing, but we were a family where our faith was our social connection with one another. Going to church, playing sports at the Catholic school, that was our family life,” said Sister Waldt.

Sister Waldt went on to college, and later became a teacher at her home parish in her mid-twenties.

“I loved teaching children, but I couldn’t imagine myself in a classroom for 30 to 40 years,” said Sister Waldt.

Soon after, she encountered the Mission Helpers of the Sacred Heart, which she described as an overwhelming experience.

“My head was spinning with the diversity of work and outreach the Mission Helpers did for the community and the church. I said, ‘That’s it, I’ll give them a chance,’” said Sister Waldt.

She spent the summer with them in Boston where they had a “live in” program. They visited parishes, and served as chaplains visiting patients in hospitals. As part of the summer experience in Boston she took part in a summer vacation bible camp.

Sister Waldt went back to teaching for another year before she officially decided to enter Mission Helpers of the Sacred Heart in 1983. Throughout her years of religious education she received her Master Degree from Boston College, worked at many parishes in various states and worked alongside many sisters.

During her religious order’s 100th anniversary, she professed her final vows. This year marks the 125th anniversary of Mission Helpers of the Sacred Heart. The year-long celebration began with a Mass celebrated by Bishop Denis J. Madden from the Archdiocese of Baltimore, where the Mission Center is located in Towson, MD.

“It is exciting to celebrate our order’s history now at our 125th anniversary. It feels not too long ago when I was saying my final vows at the 100th anniversary,” said Sister Waldt.

The origin of Mission Helpers of the Sacred Heart began in 1890 with an Irish immigrant named Mary France Cunningham later known as Mother Demetrias. Years after the Civil War, Mary witnessed the blatant discrimination against African Americans in the city of Baltimore. Even in her parish, black children were not permitted to receive religious instruction. Eventually she began to teach them herself on the church stairs until she was finally given a corner in the church basement. From there she formed a community with three other lay women dedicated to the religious instruction of African American children. Sisters opened centers for vocational training, orphanages, social outreach and education of the laity in the field of Catechetics. Their order spread throughout the United States as well as Puerto Rico and Venezuela.

“Behold, we have left all things to follow Thee,” Mother Mary Demetrias Cunningham wrote on the first page of her journal for the year 1890, the year the Community was founded.

“Working with Sister Judy has been incredibly rewarding. In fact, I was the one who asked her to please think about coming back to Florida to head up our Faith Formation program. She accepted, to my delight,” said Father D’Aversa.

Mission Helpers of the Sacred Heart have been heavily involved in the Diocese of Orlando for over 40 years. Several religious sisters work in the field of Catechesis and Spirituality; some have worked as hospital chaplains at Orlando Regional Medical Center and many served at Annunciation Parish in Altamonte Springs throughout the years. Sister Judy meets with a group of Lay Missioners once a month to reflect and discuss how the Mission Helpers along with the Lay Missioners may continue to serve the Diocese.

“They are exceptional women, who engage in all sorts of ministries, not simply the traditional roles of classroom teachers and nurses.  They have been a gift to the church bringing the love of Christ to African Americans long before it was acceptable.  I pray for a blessing on their efforts for the next 125 years,” said Father D’Aversa.

Sister Waldt cannot imagine her life any other way.

“I love my life and it has been my privilege to serve God and the church as a vowed religious. In different parishes and different ministries you are stretched to do different things you never expected to do and that has continued since I came to St. Patrick to work with Father Robert. Working with the children, youth and parishioners here demonstrates to me their desire to be actively engaged in the life of the parish and in service to those beyond our parish. I am truly blessed,” said Sister Waldt.