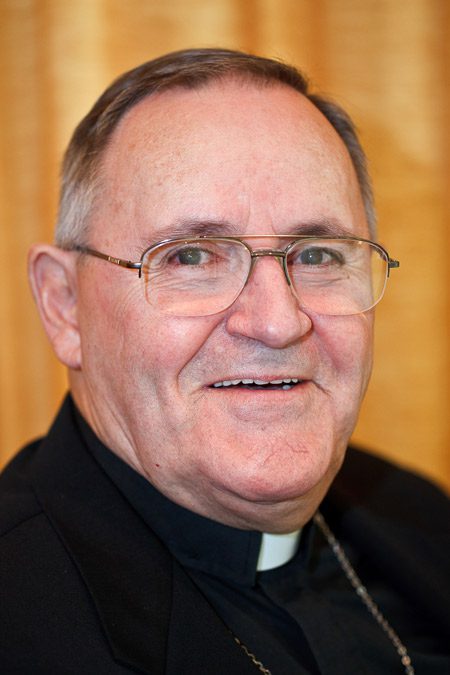 The pastor of his parish was visiting his home on a cold January day in 1944 in New Bedford, Mass. when he asked the young boy what he wanted to be when he grew up. Having earlier seen his mother put money in an envelope and give it to the senior priest, Slight said he wanted to be a priest, “so I can make a lot of money like you.”

As the years went by, Father Slight began to feel a call to serve as a missionary priest after listening to his cousin speak of his ministry as an Oblate Missionary priest in Haiti.           Also learning of the work of a family friend, a Third Order Franciscan priest serving in China, only strengthened his resolve to live a missionary life.

When he was in middle school, one of his teachers, a Sister of the Holy Cross, gave him a brochure about the seminary for the Missionaries of La Salette. This particular sister had two brothers who were in the congregation.

“I read the brochure, and that night, I told my dad and mother that I wanted to go to the seminary,” Father Slight said. “I entered the seminary at the age of 13.”

Father Slight was ordained into the priesthood on Dec. 11, 1965 at St. Marie Parish in Manchester, NH.

“I was inspired by the priests and brothers of our congregation, especially the missionaries,” Father Slight said. “At the time, we had recently established a mission in the Philippines and my desire was to be a missionary priest, so when I requested to be ordained to the priesthood, I made a joint request to be sent to the missions, specifically the Philippines. Both were granted; however, I had to spend the first year of my priesthood serving in Canada.”

In 1967, Father Slight was assigned to serve the faithful of the Philippines and he stayed there for 19 years. He said that even after returning to the United States, his heart remains with the Filipino people, and he has requested to be buried there upon his death.

After returning to the United States in 1986, Father Slight served as the mission director/vocations recruiter for his congregation for four years. He then served as superior for the La Salette Shrine in Enfield, NH, before going to Lufkin, TX, where he served as pastor of St. Patrick Parish, until his retirement in 2010.

Father Slight then moved to Florida and currently ministers as the parochial vicar at Blessed Trinity Parish in Orlando.

Looking back on his 50 years of priestly life, Father Slight said, “My joy has been in the Eucharist as well as the Sacramental lives of the people I have served. I have also been blessed by the missionary aspect of the priesthood, getting out and meeting people where they are, in villages, places of work, small towns, just being part of their community as a spiritual leader.”