More Parents Are Choosing a Catholic Education for Their Children

A happy first grade student at Holy Name of Jesus Catholic School in Indialantic “got moving” with a fun exercise activity during morning ceremonies to start off his first day of school. He and his fellow students also participated in an organized line dance, sang along to “God Bless America”, and partook in morning prayer led by principal, Mary Ann Irwin. (DAWN MELCHER | FC) 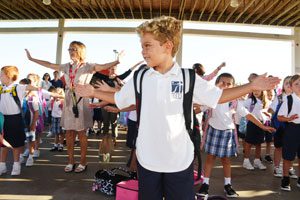 Kelly Larrea of St. Joseph Parish, Winter Haven, sent her oldest child Gabi to college this year confident that she will succeed in all areas of life.  After 13 years of Catholic education, she said she has given her daughter the right foundation of faith and academics.

Pictured right: A happy first grade student at Holy Name of Jesus Catholic School in Indialantic “got moving” with a fun exercise activity during morning ceremonies to start off his first day of school. He and his fellow students also participated in an organized line dance, sang along to “God Bless America”, and partook in morning prayer led by principal, Mary Ann Irwin. (DAWN MELCHER | FC)

“I am sending my daughter off to college with a foundation of rock, and I know it is much easier to take a stand from a rock than from sand,” Larrea said.

Larrea is not alone in wanting to give her children an education rooted in the Catholic faith. Henry Fortier, superintendent of Catholic Schools for the Diocese of Orlando, said enrollment is up at all five Catholic high schools. While he anticipated an increase in enrollment at many of the K-8 schools, Fortier said final numbers were not available at time of publication. The 2014-2015 academic year for all Catholic schools in the diocese kicked off on Aug. 12.

Noting a significant increase among the high schools was Father Lopez Catholic High School. School officials are reporting an increase of 50 students this year, which is a ten percent increase. Furthermore, this is the largest freshman class the school has ever had in its 56-year history.

The 142 members of the freshman class helped the school post its fourth consecutive year of increased enrollment. In 2008, the school moved to a new location with a sprawling, state-of-the-art campus on LPGA Boulevard in Daytona Beach.

“There is no doubt that our attractive campus and state-of-the-art facilities have played a significant role in our growth,” said Dr. Michael Coury, president, Father Lopez Catholic High School. “However, bricks and mortar alone do not make any school outstanding. Rather, the successes that students experience once they get here are what really drive family decisions to make Father Lopez their school-of-choice.

“We are committed to providing personal care and attention to each student we accept,” he continued. “Parents trust us to be good stewards of our resources and to effectively plan programs and greater learning opportunities so that their sons and daughters may grow in faith and knowledge.”

For many families, such as the Babilonias of Ascension Catholic School, Melbourne, giving their children a Catholic education comes with some sacrifice. Christina Babilonia said sending her sixth, third and first grader to Catholic school – a preschooler is coming up the ranks as well — puts a strain on the family budget. Still, she and her husband, Hector, find the investment well worth it.

“We love the Ascension community,” Christina said. “We wanted our children to be in an environment where they are taught the faith every day. It is nice to be surrounded by other families who believe in the same faith. We feel very blessed.”

Fortier commended the schools’ faculties, administrations and staff in providing a well-rounded education for all students.

“And if we really believe that God is giving us this ministry, that these children are gifts from God,” he continued, “then how can we do anything less but the very best in every area.”

The Diocese of Orlando has 42 educational institutions including 31 Pre-K through 8th grade schools, five high schools, five early learning centers and the Morning Star School for children with special needs. These schools serve Catholics and non-Catholics alike with a Christ-centered environment, rigorous academics, enriching extracurricular opportunities, where leadership is developed through service and community in a safe, secure and supportive environment.