All eyes were on conductor Dee McAfee as he stood before the music stand, baton poised in air. 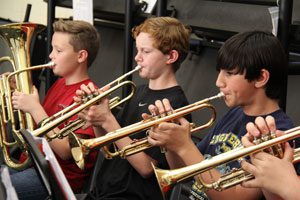 All eyes were on conductor Dee McAfee as he stood before the music stand, baton poised in air. With a flick of his wrist, the soft sound of flutes and clarinets began to flitter through the air, beckoning the rest of the instruments to join in.  Within minutes, a crescendo of music from trumpets, trombones, percussion, and other wind instruments rose up, spilling out of the small band room and onto the campus at Bishop Moore Catholic High School on an otherwise quiet Wednesday evening.

Listening to the Diocese of Orlando Honors Band, one may think it was comprised of seasoned musicians. Instead, 35 elementary and middle school students from St. Margaret Mary, St. Mary Magdalen, Holy Family, Annunciation Catholic Academy, Good Shepherd and St. Charles Borromeo Catholic schools make up the talent of the band. At the helm of the group is McAfee, a retired Winter Park police officer, a long-time professional trumpeter and current band director at St. Margaret Mary Catholic School and Annunciation Catholic Academy.

“I hadn’t planned to be a band director, but God has a way of steering you,” McAfee said, speaking about the start of his band director career 20 years ago at St. Margaret Mary Catholic School. “I was a cop trying to get my career going and he kept calling me to be a director. I realized this is like planting flowers; you plant a seed and watch the kids grow over the years. This is significant. It is way bigger than anything I had going on.”

The diocese had an Honors Band years ago, but it was very small and focused primarily on marching in Christmas and St. Patrick’s Day parades. Five years ago, when McAfee was asked to restart the band, he agreed – on one condition – that he could build a premier wind band.

McAfee has done just that. He said he runs a pro-style rehearsal that is fast-paced and energetic. He strives to teach the students to be performers. Practicing twice a month at Bishop Moore, the students play concert band literature generally used at the high school level. Each rehearsal opens with the Lord’s Prayer. The students also perform two concerts a year.

Cole, a seventh grader at St. Margaret Mary, has been a musician with the band, first playing the clarinet and now the bassoon, since its inception. He says he enjoys playing classical music, a genre he sees as less appreciated by many.

“It is cool that you can get a bunch of kids together to play classical music and love it,” he said. “I plan on keeping my music with me all the time. I will never let go of it.”

“Band for me is a way for me to grow in my arts and allows me to connect with other students,” she said. “I am so glad God gave me the gift of music.”

McAfee said watching the children grow in their God-given talents and friendships has touched him.

“It’s a very cool thing to see the children who have just competed against each other on the sports field come together as a team and perform together in the Honors Band,” he said. “There is nothing better than music for children.”