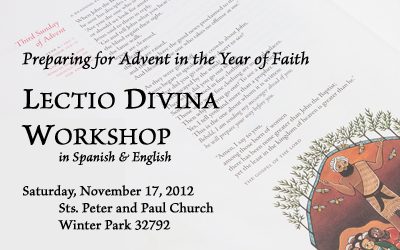 Patroness of the Environment Canonized

The Second Vatican Council and Ecology

Mr. Ferguson was originally scheduled for execution on October 16th.  He was granted a stay of execution by Gov. Rick Scott in order for mental health professionals to evaluate his mental capacity as he has been diagnosed with severe mental health issues including schizophrenia. A higher federal court then lifted the stay and Mr. Ferguson’s lawyers filed briefs with the United States Supreme Court. The high court upheld the earlier stay of execution on Tuesday October 24th, as Mr. Ferguson was being prepared for execution. We ask that all Catholics and people of good will pray for all those involved in this case. Mr. Ferguson has been on death row for 34 years. Let us pray that Governor Scott stops executions in the State of Florida. Please contact Gov. Scott by following the link below. Also, for more information on Mr. Ferguson’s case read here.   To contact Gov. Scott: www.flgov.com/contact-gov-scott/.

The next Helpers’ Mass and Rosary procession will be held at St. James Cathedral (215 N. Orange Ave. Orlando) on Saturday, November 3rd, 2012 beginning with Mass at 8am. Following Mass we will process to the nearby abortion clinic on Lucerne Terr. while praying the rosary together. Please join us in praying for the protection of human life. For more information, contact the Office of Advocacy and Justice; 407-246-4819; advocacyjustice@orlandodiocese.org

There is still time to register and join us for the Million Meal Challenge. We will pack a million meals to send to the impoverished country of Burkina Faso in Africa. This is a combined effort with Catholic Relief Services and Catholic Charities of Central Florida. The packing day is November 18. Be sure to register!

People who count these things tell us that this was the first presidential debate series in 24 years that failed to mention climate change even once: that’s since the first George Bush.  Yes, this election is about the economy but even as more and more people want to see something done about climate change, our political leaders and their parties fail to provide any leadership in this area. Instead, each candidate tries to outdistance the other in his support for fossil fuels while giving only glancing nod to renewable energy and discounting the perils of our present course.

The same holds true for the struggles of the poorest of our own citizens and the desperately poor around the world.  In a Washington Post article, Kathy Saile, domestic policy director at the US Conference of Catholic Bishops, laments the absence of any serious discussion on poverty and says, there’s been so much campaign talk about the middle class you’d swear what Jesus told us in Matthew 25 was, “Verily I say unto you, whatsoever you have done unto the middle class, you have done unto me.”

For Catholics, we care for both people and the planet.  This is why we believe that understanding “who’s under your carbon footprint” is such a good slogan for our Covenant campaign.  It’s not just about the planet or about people, but about both.  Our actions that disturb the planet cause suffering of God’s creation and especially God’s people.

Patroness of the Environment Canonized

A recent article reports that Catholic Charities of Houma-Thibodaux, Nicholls State University and the Barataria-Terrebonne National Estuary Program will collaborate in a Coalition-sponsored screening of Sun Come Up.  The documentary will be screened at 6 pm on November 1 in Peltier Auditorium at Nicholls State University. The report notes that Rob Gorman, director of Catholic Charities of Houma-Thibodaux, said he decided to bring a screening of the film to Lafourche, because watching the trailer for the film, “I see south Louisiana right now.”  Land loss through erosion and rising sea levels in Louisiana continues to be a pressing problem.  Gorman went on to say that he expects the film to deeply affect audience members because, in Louisiana, [w]e’ve got our own climate migrants right now with the problems we’re facing from sea level rise, subsidence and erosion.

The Second Vatican Council and Ecology

As the Church continues to celebrate the 50th Anniversary of the opening session of the Second Vatican Council, EcoJesuit reflects on the influence of Vatican II on ecological concerns: Vatican II recalls how human work contributes to a better society and creation itself (Lumen Gentium 41).  It further states that according to the Bible, God himself found very good all that was created (Gaudium et Spes 12).  Creating and maintaining the universe by His Word, God gives men through creation an enduring witness of himself (cf. Rom 1: 19-20). In the constitution, Lumen Gentium 48 is trying to overcome the duality, the apparent conflict between the earthly hope and transcendent hope.

The Council reminds us that human destiny is linked to that of all creation. This final restoration that we hope has already begun in Jesus Christ and also invites us, followers of Jesus, to join his task.

In another text of the Council (Gaudium et Spes 21) it reminds us that, “a hope related to the end of time does not diminish the importance of intervening duties but rather undergirds the acquittal of them with fresh incentives.” Christian hope so understood makes us also responsible.  A responsibility that, as the Council reminds us, also extends itself from our present time to the future: “We can justly consider that the future of humanity lies in the hands of those who are strong enough to provide coming generations with reasons for living and hoping.” (Gaudium et Spes 31).

The Catholic Conference of Ohio has officially launched a new Care for Creation webpage. Click here and follow the link to “Care for Creation.” The new site offers Church teaching on the environment, applying it to a variety of issues pertinent to Ohio.

The Ohio Care of Creation site provides resources for families, parishes, schools and other institutions.

The Clean Water Act was passed by Congress and signed into law in October 1972. It was critically needed to help keep sewage, chemicals and trash out of our waterways. Over the last four decades, urban waterways have greatly improved and other waters have met standards for swimming and fishing, according to EPA reports.

Of course, most agree that much more work needs to be done. Many challenges remain for clean water in all our communities across the country. Americans expect to consume as much water as they like, but we need to better conserve our limited supply and even think of water as a sacramental commons.