Ordination to the Priesthood – a Day for Rejoicing

ORLANDO – On May 28, Luis Salazar and Martin Nguyen entered St. James Cathedral as deacons and left as priests. In the presence of more than 1200 family, friends and supporters, the two men were ordained as priests by Bishop John Noonan. Both are from opposite sides of the world, and in their faith journeys, they’ve traveled many miles. 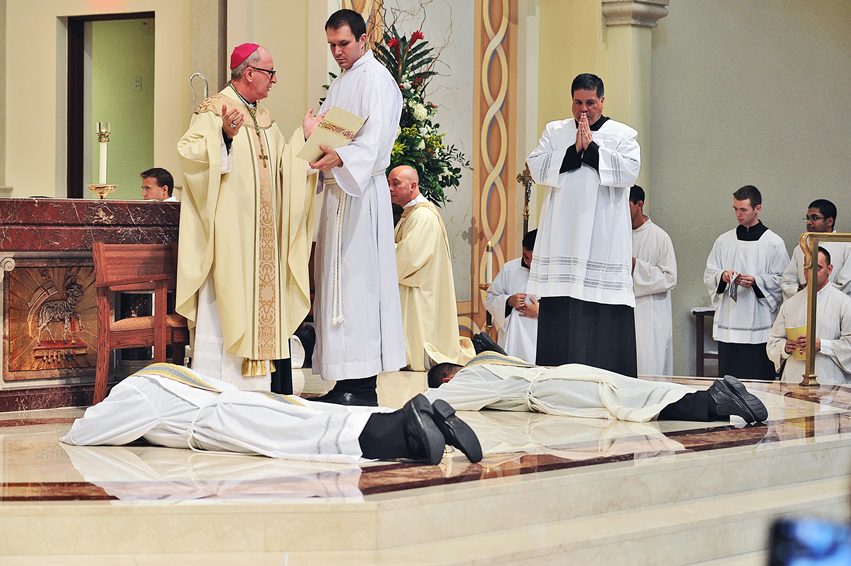 Father Salazar, 52, is a native Colombian who came to the United States in October 2002. A banker for 20 years, he worked as a janitor and at a dental lab when he arrived here. It was on a Cursillo retreat that the seed of a vocation was planted, but it was in deep prayer in front of the Blessed Sacrament that he accepted the call to the priesthood. “It took three or four years to answer the call,” he said.

His family played a pivotal role in his early faith formation.

“My grandmothers on both sides gave me a prayerful life. My grandmother on my father’s side and I used to pray the rosary together. At home I remember praying with my mother to my guardian angel and going to Mass every weekend. My mother had a special devotion to novenas,” he added.

Both of his parents showed respect for God, demonstrated moral values and a sense of responsibility. “I was encouraged by my father to be a man of rules and values. Those helped me be the man I am today. It’s not directly tied to the vocation, but it is the lifestyle that is necessary to be a priest.”

Although she is no longer living, the person who probably had the biggest impact in Father Nguyen’s decision to pursue a vocation was his grandmother. “She was dying of cancer and I sat by her bedside reading religious books to her. She showed me how to live a Christian life and that made a huge impact. She died when I was 11 years old. I think she would be so incredibly proud to see where I am today,” he said.

Father Nguyen, 26, came to the United States from Vietnam when he was 16 years old. He had never before left his native country, much less flown on a plane. He visited the seminary when he was a senior in high school, and gave God a yes to his call. It was during his pastoral year, between the second and third year of theological studies, that he felt an incredible joy and affirmation doing and living the life of a parish priest.

Although he left Vietnam, the values instilled in him by his mother, grandmother and his culture still remain very much with him. “My country is poor, and even at a young age we learned the values of hard work, dedication and sacrifice. Those are the things that are so beautiful in the Vietnamese culture. My mother and grandmother made tremendous sacrifices for the people they loved.”

During his second year in the seminary, Deacon Nguyen was sent to Washington, DC to learn sign language. He had served in a parish with a small deaf community and fell in love with the language. It is one area in which he’d like to focus during his ministry. “I want to reach out to the deaf and bring the good news of the Gospel. They deserve to hear the good news proclaimed to them.” The next phase of his journey will not lead him far as he has been assigned to serve at St. James Cathedral.

Newly ordained, Father Salazar hopes to focus on families and children during his ministry, which will begin at Resurrection Parish in Lakeland. “I love working with families. I engage in dialogue with children through sports such as soccer, running and volleyball.” He is an avid soccer player, and hopes to continue to play the game even as a priest.

Being ordained during the Year of Mercy is especially significant for both men. “I think being ordained shows the mercy of God towards me,” Father Salazar said. “At the same time, I am called to be a minister of mercy for the people of God.”

“Only love and mercy heal the wounds of violence and anger,” Father Nguyen said. “We can’t grow and become better by focusing on the negative. Mercy isn’t condoning everything. Mercy, love, is the final answer and God’s love heals everything.”

Particularly moving during the Ordination was the moment in which the newly ordained were assisted by mentor priests in arranging the stole and wearing the chasuble. All the while, the choir chanted Psalm 110:4, “Christ the Lord, a priest forever in the line of Melchizedek, offered bread and wine.”

These men fall in the line of this first priest mentioned in the Old Testament and in apostolic succession, a long journey indeed. Their journey is also a witness to others. Edwin Rios, a discerner of several years and a recent high school graduate said, “I can see a fulfillment of the work and prayers of these men. I hope to get accepted to the seminary. If God takes me that way, I will gladly follow.”

After the ordination, Salazar’s mother Isabel perhaps put it best when she said, with tears in her eyes, “It is a joy in the Lord that is indescribable!”