Pinwheels for Peace, Another Step Toward Unity 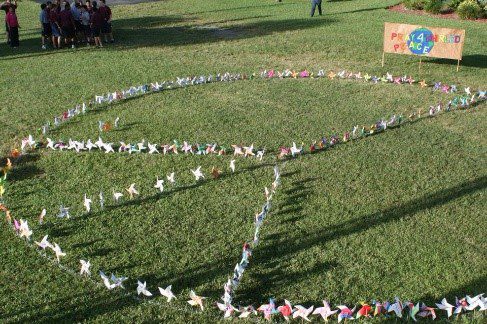 As human beings, there are times we do not always live in peace. War and strife consistently plague almost every corner of the planet. Gang violence, domestic disputes, and political disagreements have led to major separation between the general populace. Like many others, the Pinwheels for Peace movement is trying to unify the world under one, spinning banner.  In recognition of International Day for Peace, on September 22, 2017, St. Joseph Catholic School in Palm Bay took part in the Pinwheels for Peace project, beautifully stating their most important ideal—that all humanity can live in peace.

Together, the students at St. Joseph’s banded together and constructed pinwheels. Each pinwheel had its own image depicting each student’s view of what peace and care are to him or her. The pinwheels also had written ideals of peace on the flip side. Many of them had “Unity” inscribed on the backs. These thoughtfully illustrated pinwheels were then mounted in grade order and in the shape of the universal symbol of peace.