The past six months have been life changing for Jenn Bazemore Fundora, a parishioner of St. James Cathedral. It all began on Dec. 21, 2013, when she married her husband, Chris. 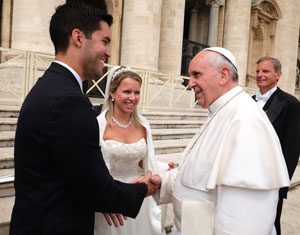 The past six months have been life changing for Jenn Bazemore Fundora, a parishioner of St. James Cathedral. It all began on Dec. 21, 2013, when she married her husband, Chris. In the months that followed, she graduated from the University of Central Florida  College of Medicine, was admitted to the pediatric residency program at the prestigious Johns Hopkins Hospital in Boston, and the most life-changing event-she and Chris received a blessing from Pope Francis at a special newlywed ceremony in Rome, known as Sposi Novelli.

The Fundoras had already planned a graduation trip to Rome when they learned about the nuptial blessing. They jumped at the chance to be part of it, and on April 23, they joined nine other couples from around the world, all dressed in wedding attire. Each couple spent about two minutes with the pontiff.

“We were thrilled and beyond excited to have had this opportunity,” Jenn said.

“It was literally a once in a lifetime chance to have our marriage blessed by the Holy Father that we’ll be able to share for years to come.”

To request the audience with the pope, Jenn contacted Christine Shields of the Diocese of Orlando Office of Canonical Affairs in July of last year. Shields had to contact the Bishop’s Office for US Visitors to the Vatican to make the request. Over a six month time period, several correspondences took place with Shields acting as the intermediary between the Vatican and Jenn.

To receive the blessing, couples must have been married in a Catholic church, ideally within two months of their Papal visit, present their certificate of Sacramental marriage signed by their priest, and wear wedding attire at the event.

“I LOVE it when I can help – in a small way – make a dream come true for our Diocese of Orlando pilgrims!” said Shields.

During the ceremony, the couples were ushered in front of St. Peter’s Basilica to receive their personal blessings in private, after the Pope’s weekly audience. The blessing was especially meaningful to Chris and Jenn because their parents were also able to travel to the Vatican to share their experience.

Jenn described Pope Francis as being down-to-earth and a peoples’ Pope.

“We saw one couple take a ‘selfie’ with him, which wasn’t really allowed, and everyone was told to put their phones away,” she said. “We were disappointed, so at the end of our conversation, Chris asked if he could have a hug, and Pope Francis said, ‘of course!’ I don’t remember exactly what he (the Pope) said because we were very caught up in the moment.”

To celebrate the event, each newlywed received a white rosary blessed by Pope Francis. For now, Jenn and Chris’ rosaries are tucked safely away, but Jenn said she plans to share her story and the rosaries with family members for generations to come.

“Our faith and spiritual lives are very important to us and this experience is something that we would not have passed up,” she said. “It meant so much to be able to share this experience together as husband and wife. The fact that Pope Francis takes his time to meet with each couple individually is incredible and it shows how much he cares about the younger members of the Church and emphasizes marriage and how special it is to be a new family together.”