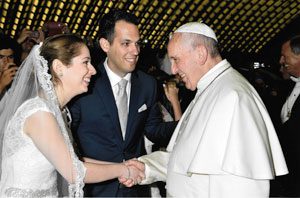 Robert and Sandra Rodriguez met Pope Francis for the first time at St. Peter’s Square in Vatican City for their sposi novelli (newlywed) Papal Blessing in August. During specific general audiences, Catholic couples who have married within 2 months of the audience have the opportunity to receive a personal marriage blessing from Pope Francis.

Robert and Sandra received their Papal Blessing 4 days after their wedding ceremony, also taking the moment to ask Pope Francis for marriage advice.
“Pope Francis told us we must always make it a point to not go to bed angry with one another,” said Sandra, parishioner of Holy Cross in Orlando. “He also said sometimes all you need is to do small gestures. So he leaned in and patted Robert on the cheek to show us a sign of affection.”

Alongside Robert and Sandra, 29 other couples from different parts of the world also received marriage blessings. Every couple came dressed in elegant tuxes and long white wedding gowns; a requirement for a sposi novelli Papal Blessing.

“There are thousands of people gathered cheering and chanting,” Robert remembers. “But it truly felt like it was the 3 of us alone together when he spoke. We were filled with so much joy and hope for our lives together.”

Before Robert and Sandra’s time with the pope finished, they asked him if they could hug him.

“Pope Francis lit up cheerfully and smiled at us before he leaned in for the hug,” said Sandra.

The words of advice Pope Francis gave the newlyweds has motivated them to be evermore committed to their marriage.

“A strong marriage centered in Christ is so rare in today’s world. We wanted to make that commitment official with the Holy Father,” said Robert.

After Pope Francis left the general audience, Robert and Sandra walked down the center aisle listening to the cheers of thousands gathered in Saint Peter’s Square.

“They were cheering for us to kiss, so we did. It was an unbelievable moment and experience,” said Sandra.