Pope Francis arrived in the United States and is scheduled to be here until Sept. 27. From a conclave of 115 cardinals, he was elected pope on March 13, 2013. Since then Pope Francis’ charisma and direct involvement with people have sparked interest and devotion for many Catholics and even for those of different faiths. This is his first visit to the U.S. 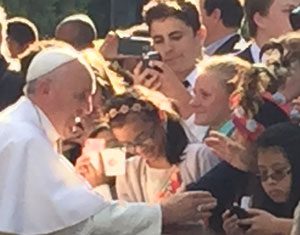 Pope Francis arrived in the United States and is scheduled to be here until Sept. 27. From a conclave of 115 cardinals, he was elected pope on March 13, 2013. Since then Pope Francis’ charisma and direct involvement with people have sparked interest and devotion for many Catholics and even for those of different faiths. This is his first visit to the U.S.

During a Diocesan press conference on Sept. 17 dedicated to Pope Francis’ apostolic journey here in the United States, several key speakers spoke of the local impact the pope will have. Bishop John Noonan opened the discussion on how Pope Francis’ grace and humility is changing the way people see the leader of the Roman Catholic Church.

“Although I have never met him, Pope Francis speaks the language of the people; he knows how to address the people,” said Bishop Noonan. “Pope Francis is a person who wants to bring Christ’s love and mercy to others. His visit to the United States will remind us of the importance of our faith and God and our relationship with Jesus Christ.”

On the agenda for Pope Francis was the Canonization Mass of a Spanish friar named Junipero Serra on Sept. 23 at the Basilica of the National Shrine of the Immaculate Conception in Washington D.C. Father Miguel Gonzalez pastor of St. John Vianney Parish in Orlando, spoke of the meaning behind having an American Latino become a saint since he too moved to the U.S. at the age of 9 from Puerto Rico.

The youth are heavily engaged with Pope Francis; many of who follow him on social media sites such as Twitter. In the state of Florida, there are over 150 young men preparing for the priesthood and many traveled to D.C. to see Pope Francis. Seminarian Blake Britton of St. Catherine of Siena Parish in Kissimmee spoke of Pope Francis’ ability to breathe new life into the Christian faith.

“This man, who is the people’s pope, has provided an intensely humble and joyful love of Christian living,” said Britton. “As an American preparing for the priesthood, I am being called to serve an incredibly vibrant and a rapidly growing faith community. I can only pray Pope Francis will set fire to my own heart so that I too might be a priest who humbly and joyfully proclaims the gospel of Jesus Christ to the world.”

As American Catholics continue to witness the Holy Father in the United States, one thing is certain from the voices of people throughout the world; he is the people’s pope.

The Diocesan press conference with additional speakers apart from those mentioned, may be found on the Diocese of Orlando website: https://www.orlandodiocese.org/uspapalvisit

The United States Coverage of Catholic Bishops will provide live streaming coverage of all events of the Holy Father’s visit. All events will be live streamed in English with audio commentary from the USCCB website here: http://www.usccb.org/live

You can also watch livestreaming and video on demand as well as up to the minute news and photos from a new app available from the USCCB. The USA Catholic Church app is free to download at Google Play and Apple iTunes in English and Spanish. You can download by visiting www.USACatholic.church from your smartphone or tablet device

In addition, Bright house Networks “Local on Demand” Channel 999 will have coverage of the Pope’s visit to Cuba and the United States.