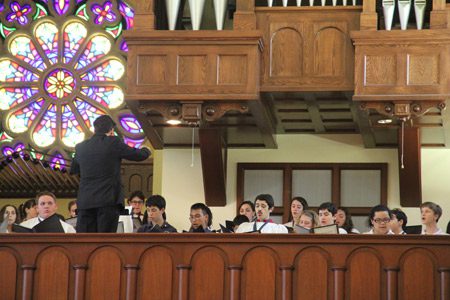 Pueri Cantores, the national student choral organization of the Catholic Church, will present a repertoire consisting of treble and mixed-voice choirs during the 4 p.m. Mass on Saturday, Feb. 21, at St. James Cathedral in Orlando. The singers, who are students from grades four to 12, are members of parish choirs from all seven of Florida’s dioceses.

Pueri Cantores organizes choral festivals for Catholic parish and school choirs throughout the United States. Singers join together as a large combined choir to prepare and present liturgical music, whose repertoire spans more than 1,500 years — from Gregorian chant and polyphony to masterworks of the 20th and 21st centuries. The repertoire includes music such as “How Lovely is Your Dwelling Place”, “The Glory of these Forty Days,” and “Cantate Domio.” Several parts of the Mass will also be chanted, including the “Kyrie,” “Sanctus” and “Agnus Dei.”