Recording the Baptism of Adopted Children 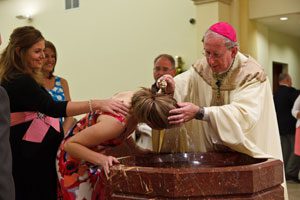 The action was granted recognitio by the Congregation for Bishops in accord with article 82 of the Apostolic Constitution Pastor Bonus and issued by decree of the Congregation for Bishops signed by His Excellency Most Reverend Giovanni Battista Re, Prefect, and His Excellency Most Reverend Franciscus Monterisi, Secretary, and dated September 30, 2000.

Complementary Norm: The United States Conference of Catholic Bishops, in accord with the prescriptions of canon 877, §3, hereby decrees that:

Baptismal certificates issued by the parish for these individuals shall give only the name(s) of the adoptive parent(s), the child’s new legal surname, the date and place of baptism, and the name of the minister who conferred the sacrament. The name(s) of the sponsor(s) shall not be given, and no mention of the fact of adoption shall be made on the baptismal certificate.

Parish personnel having access to parish registers have an obligation not to disclose to any person any information which would identify or reveal, directly or indirectly, the fact that a person was adopted.”