On June 17 Pope Francis prayed, “for the many brothers and sisters who seek refuge far from their native lands, who seek a home where they can live without fear: that they might always be respected in their dignity.” 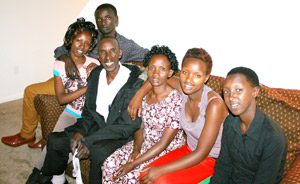 On June 17 Pope Francis prayed, “for the many brothers and sisters who seek refuge far from their native lands, who seek a home where they can live without fear: that they might always be respected in their dignity.”

Just days later, on Saturday, June 20, over 400 guests joined Catholic Charities of Central Florida (CCCF) to recognize World Refugee Day, a day set aside by the United Nations to honor the courage of refugees determined to begin a new life for their families where they can live without fear.

“Refugees are here in the U.S. because their lives were in danger in their home country. We are here to honor their courage, give them hope and provide resources for their safety, security and dignity as humans,” said Richard Logue, Director of Caring for Immigrants and Refugees at CCCF.

“While we celebrate the success of refugees who have come to the United States to resettle, it is important that we also remember those refugees left behind who still wait for their opportunity to resettle somewhere safe or return to their home countries no longer torn apart by war,” said Patti Grogan, Director of Refugee Services for the Department of Children and Families (DCF).

DCF helps support Catholic Charities of Central Florida and its Comprehensive Refugee Services program that provides assistance to newly-arrived refugees residing in Orange, Seminole and Osceola counties. Over 3,000 individuals were served under this program during the past year.

66-year-old Kayibushi was one of the guests attending the World Refugee Day event at Oak Ridge High School in Orlando. He and some of his family members arrived here from Gihembe, a refugee camp in Africa on June 16.

Gihembe is one of five refugee camps in Rwanda where the United Nations High Commissioner for Refugees (UNHCR) is providing protection and assistance to refugees and asylum-seekers.

Kayibushi’s family had been living in the refugee camp since 1995 after fleeing their home in the Democratic Republic of Congo at the beginning of the conflict known as Africa’s First World War.

“Life in the camp was hard. We got food, but never enough,” Kayibushi said to his translator, Andre, who arrived here from the same refugee camp last summer with his mother and three siblings.

“I know what they are experiencing. Kayibushi is thankful for Catholic Charities and hopeful for his family’s future here in the United States,” said Andre who volunteers as a translator for CCCF to help offer hope to people he says need it the most.

“I want to use the opportunities you gave me to help other people,” Andre said referring to his case manager who helped him obtain English classes, job assistance and other resources. “She told me to have hope in everything I do. That word – hope – has helped me accomplish many things.”

One of those accomplishments was passing his driver’s license exam on the first try. Andre is now able to get to and from work in his own car provided by CCCF’s car donation program.

For refugees like Kayibushi and his family, World Refugee Day was an experience in community. The event brought many cultures together with traditional music, dance and cuisine representing 13 countries including: Afghanistan, Burma, Colombia, Cuba, Dem. Rep. of Congo, Egypt, Ethiopia, Haiti, Iraq, Somalia, Sudan, Syria and Venezuela.

Florida has the largest refugee population in the U.S. with more than 27,000 resettling in the state annually. While the majority of Florida’s refugee clients come from Cuba, the state is home to refugees from 97 different countries.

Globally, one in every 122 humans is now either a refugee, internally displaced, or seeking asylum.

For over thirty-five years CCCF has assisted the Church in its role of ‘welcoming the stranger’ as called to do in the Scriptures, Matthew 25:35, by helping over 14,000 individuals resettle in Central Florida.

Learn more about how CCCF is helping the Central Florida immigrant and refugee community at http://cflcc.org/immigrants/