In celebration of the Year of Consecrated Life, we have featured a three-part series highlighting some of the religious communities serving the Diocese of Orlando and the impact they have made in the lives of the faithful. Pictured: Father Carlos Anklan of Resurrection Catholic Church in Winter Garden greets parishioners. 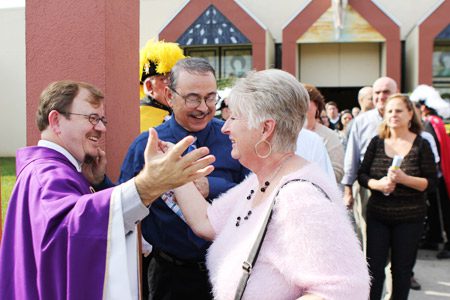 In celebration of the Year of Consecrated Life, we have featured a three-part series highlighting some of the religious communities serving the Diocese of Orlando and the impact they have made in the lives of the faithful.

Noted already were the early contributions of the religious communities that helped establish the diocese with their mission of teaching and establishing parishes, while the second installment, which appeared in the Feb. 20-March 12 edition, highlighted some of the communities serving the diocese today in the areas of social justice, education, parish life and the care of the San Pedro Spiritual Development Center in Winter Park.

This, the last installment of the series, features some of the religious communities that have recently arrived in our diocese and are a reflection of the growing diversity in our nine-county region.

Servants of the Pierced Hearts of Jesus and Mary: 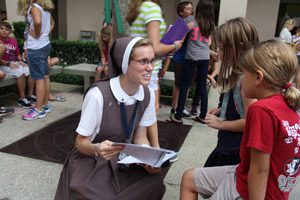 On Aug. 15, 2012, the solemnity of the Assumption, Annunciation Catholic Church in Altamonte Springs welcomed three religious sisters of the Servants of the Pierced Hearts of Jesus and Mary into its faith community. Founded in 1990, the order is among the youngest in the Church. In the few years that the sisters have ministered in the diocese, they have not only been a blessing to the faithful of Annunciation, but for the diocese as a whole.

“It is our hope to bring a greater love for the Hearts of Jesus and Mary to all, to be the living image and presence of the Heart of Mary in the Heart of the Church in the simplicity of our consecrated lives and missions.”

Sisters of the Immaculate Heart of Mary Reparatrix: 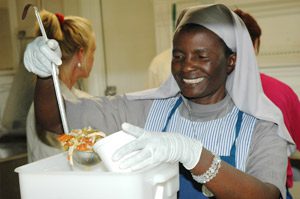 In 1998, Sister M. Concepta Najjemba visited Blessed Trinity Catholic Church in Ocala to speak to parishioners about the needs of her home diocese in Uganda, Africa on behalf of her religious community during the Propagation of the Faith collection. Soon after, Father Patrick Sheedy, pastor, invited the sisters to relocate to Ocala to serve the parish. Two years later, Sister Najjemba, Sister M. Theodozia Namuddu, and Sister M. Juliet Nakalema Ateemyi, arrived in Ocala and embarked on a mission of faith and love, not only ministering to the people of the parish, but also those of the community, who depend on the services of the parish’s local outreach ministry, Brother’s Keeper. The parish also continues to serve their sister parish in Uganda.

The people of Ocala have been blessed in numerous ways throughout the years as the sisters continue to live their charism.

“Each life is consecrated. Through our Baptism we are all priests, we are all prophets, we are all kings. We are sent into the world and we will continue to do so because Jesus set a very good example and we are to follow him.” 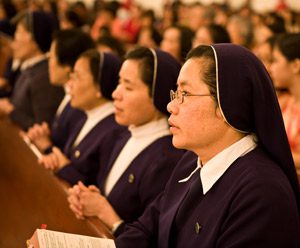 Twenty-six years ago, 11 Sisters of the Incarnation Consecration Mission (ICM) arrived in Orlando to serve the growing Vietnamese community who had resettled in the area in the years following the Vietnam War. Recent refugees themselves, the sisters settled into a two-bedroom house and embarked on their new ministry.

In the years that followed, they watched the Vietnamese community grow from having one Mass a month to having its own parish, St. Philip Phan Van Minh. Between their early work with the refugees, their ongoing ministry at the parish, and the presence of Christ they bring to their workplaces, the sisters have touched countless lives.

“Our main charism is to imitate Christ…to come to the people and work among them, live among them, and be with them first of all and witness to Christ. Working in our jobs is one of the ways to live out our mission because we think that mission work is not just in Church environments, but other environments too.” 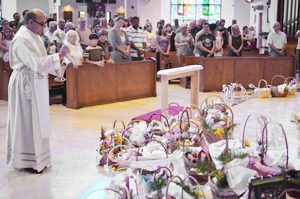 The Diocese of Orlando is blessed by cultural diversity through so many immigrants, all united in the Universal Church, who have come to call Central Florida home. Among the eight ethnic groups served is the Polish community, represented in part by the Order of Discalced priests. The ministry to the Polish community began in 1993, when Father Benedict Andrzej Jurkiewicz was invited to periodically celebrate Mass in his native Slavic language. Nearly a decade later, he began commuting weekly to St. Joseph Catholic Church in Orlando for an assignment he thought would last two or three months. Instead, Father Jurkiewicz made the 100-mile trek each weekend for two years. Finally, in 2004, he moved to Orlando when he was named parochial vicar of the parish, where he remains today.

“When there is no place to celebrate the Mass in a particular language, then it becomes like missionary work. It’s not exactly like Africa, but the work of a priest is missionary work.”

The Diocese of Orlando Brazilian/Portuguese Ministry was founded in 2002 to meet the needs of the growing Latino population. At the time, many Brazilians were forsaking Catholicism and moving to other Christian churches because they offer services in their language. Bishop Norbert M. Dorsey, CP, recognized the disparity and asked the Missionaries of St. Charles, also known as Scalabrinians, to send a priest to Orlando to minister to the estimated 17,000 Brazilian and Portuguese immigrants, and shortly thereafter, weekly Masses for the community began to be celebrated at Annunciation and Holy Family Catholic churches.

The Scalabrinian charism is missionary service to immigrants, especially those in need. John Baptist Scalabrini, an Italian bishop, founded the international community of priests and brothers in 1887. The Diocese of Orlando is blessed to have two Scalabrinian priests at Resurrection Catholic Church in Orlando who continue to serve the Brazilian population.