Remembering the Bishop of the Moon

On June 18 the Diocese of Orlando will be 48 years old. Anniversaries mark a moment in time and recognize events that we want or should remember because they have affected us individually, as a family, or as a community. 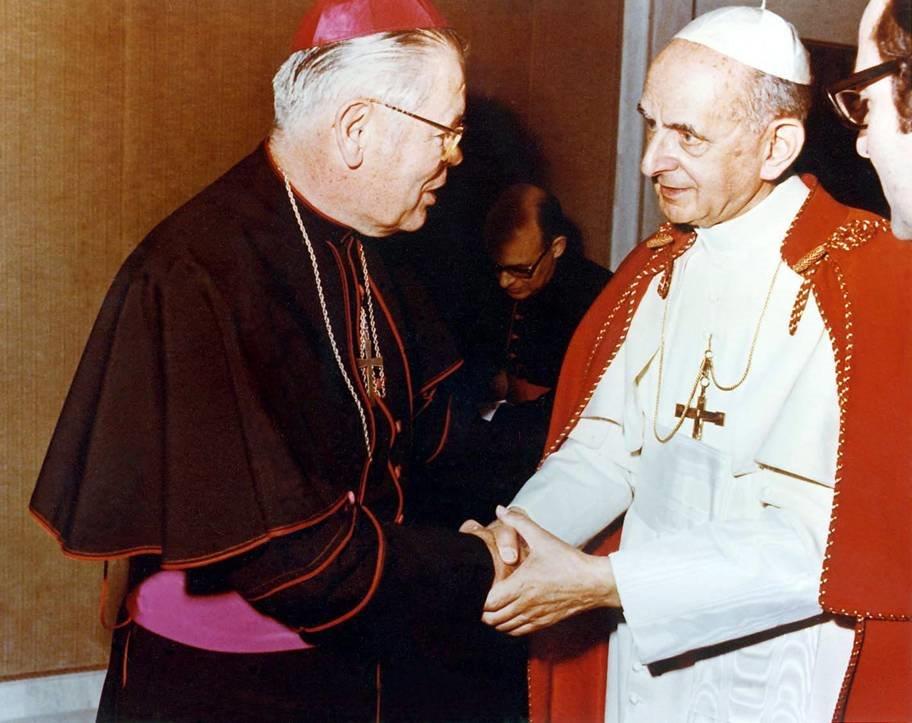 Not all anniversaries are happy or about celebration but all are about memories of something that matter to us. The anniversary of the Diocese of Orlando is a chance to reflect on our community and identity as a Catholic people in Central Florida. Therefore, we bring you a story of Bishop William Borders, the “bishop of the moon.”

Pope Paul VI appointed William D. Borders as the first Bishop of Orlando in 1968. At its creation the Diocese of Orlando encompassed thirteen counties: Brevard, Highlands, Indian River, Lake, Marion, Okeechobee, Orange, Osceola, Polk, Seminole, St. Lucie, Sumter and Volusia. Bishop Border’s words to the Orlando community at his installation Mass on June 18 were: “I come not to be ministered to but to minister.”

Bishop Borders was a “Hoosier,” born and raised in Washington, Indiana. He was ordained for the Archdiocese of New Orleans in 1940, served as a chaplain in the United States Army during World War II, taught at the Catholic Student Center at LSU, and at the time of his appointment to Orlando was serving as rector of St. Joseph Cathedral in Baton Rouge among many other duties. Humble, kind, courageous, and collegial, he was a man of service who listened. Appropriately then, his Episcopal Motto was “Auscultabo Ut Serviam / I will listen, that I may serve.”

Bishop Borders served in the Diocese of Orlando for 6 years. He was known for his pastoral warmth and humor, his sense of accountability to God, his administrative ability, his involvement of laity along with clergy and religious in diocesan service; and not least, his life as a man of prayer.

All of these qualities and skills came into play as he worked to bring the idea of a diocese into reality. He established the infrastructure of the diocese, setting up a Chancery and Chancery offices and appointing Chancery officials, directors of diocesan services and of lay organizations to lead them. Among the many accomplishments occuring during his episcopacy were the formation of parish councils, the Presbyterate, the Sisters’ Council, the formation of parish and high school education boards, a migrant ministry apostolate and a campus ministry program. He was also a leader in ecumenical and interraccial relations.

Regarding the Archbishop’s wit, there is charming story about his ad liminaapostolorumvisit to Pope Paul VI in 1969. Canon law requires all bishops to come to Rome to appear before the Pope every five years and to venerate the tombs of the blessed apostles Peter and Paul, who were martyred in Rome. The term ad limina apostolorum means “to the thresholds of the apostles” and refers to the visits to these tombs.

This visit by Archbishop Borders to Rome occurred after the Apollo 11 mission when astronauts Neil Armstrong and Buzz Aldrin landed the lunar module on the moon on July 20, 1969 while Michael Collins remained in orbit piloting the command spacecraft. Paul Paul VI was quite engaged with the mission, following it on television and peering at the Moon through the telescope at the Vatican Observatory.

During his visit, Bishop Borders mentioned to the Pope that he was the “bishop of the Moon”. Responding to the Pontiff’s perplexed reaction he explained that according to the 1917 Code of Canon Law (in effect at that time) any newly discovered territory was placed under the jurisdiction of the diocese from which the expedition which discovered that territory left. Since Cape Canaveral, launching site for the Apollo moon missions was in Brevard County and part of the Diocese of Orlando, then in addition to being bishop of 13 counties he was also bishop of the moon!

However, Bishop Borders had rivals to his claim of episcopal jurisdiction. At a prelaunch banquet at Patrick Air Force Base Cardinal Terence Cooke of New York vied with Archbishop Coleman Carroll of Miami for the honors. Cardinal Cooke’s claim was based on his being vicar of the Military Ordinate with a base at Cape Kennedy while Archbishop Carroll claimed that his jurisdiction was based on the tradition that the moon is always over Miami!

Bishop Borders departed the Diocese of Orlando in 1974 when he was appointed by Pope Paul VI as Archbishop of Balitimore. In his 6 years episcopacy he served the diocese well and faithfully. He helped to form us as a people of God. In two years the Diocese will celebrate its 50th anniversary and perhaps, in honor of Archbishop Borders and all the good and faithful people who have served and worshiped in Central Florida, our celebrations will be over the moon.