Do you know of someone who would make a good priest? Invite him to consider the priesthood. 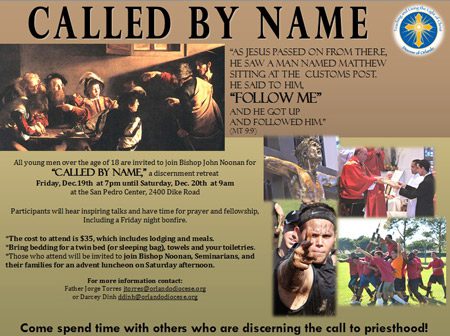 Do you know of someone who would make a good priest? Invite him to consider the priesthood.

As the Director of Vocations for the Diocese of Orlando, Father Jorge Torres believes strongly that many men would seriously discern the priesthood if someone would only plant the seed.

“We are asking priests, deacons, directors of religious education, youth ministers, young adult ministers, vocation services committees to prayerfully consider the young men in their parishes or diocesan entities who exhibit priestly qualities,” said Father Torres, who is currently planning for an upcoming retreat for young men who are thinking about priesthood. The retreat is titled, “Called by Name” and it will be held Dec.19-20 at San Pedro Center, Winter Park.

“This retreat is an opportunity for the ‘Christian community’ to call forth these men to consider the vocation. There are many good prospective priests who simply want to be asked,” said Father Torres. “According to research, if three people ask a young man to consider priesthood the discernment goes from superficial to serious,” he added.

Bishop John Noonan will help lead the retreat and take part in activities. Participants will hear inspiring talks and have time for prayer and fellowship.

Anyone who knows of a young adult man with priestly qualities, you are encouraged to speak with the individual to let him know about the retreat. Or you may submit his name to the Diocese of Orlando Vocations Office so that he may receive an official invitation to participate in the retreat. Contact Father Jorge Torres at jtorres@orlandodiocese.org or Darcey Dinh at ddinh@orlandodiocese.org.