On Sunday, February 22, a packed congregation at the Basilica of the National Shrine of Mary, Queen of the Universe in Orlando gathered to celebrate the Rite of Election for catechumens. 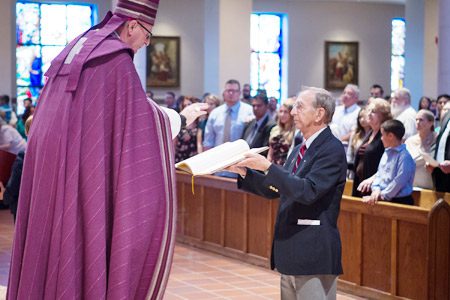 On Sunday, February 22, a packed congregation at the Basilica of the National Shrine of Mary, Queen of the Universe in Orlando gathered to celebrate the Rite of Election for catechumens.

The Rite of Election, typically held the first Sunday of Lent, formally recognizes individuals who have been preparing for the Sacraments of Baptism, Eucharist and Confirmation. During the ceremony, parish representatives acknowledge the catechumen’s readiness to become Catholic and Bishop John Noonan declares them as the Elect of God.

Will Furiosi, a catechumen from Most Precious Blood Catholic Church in Oviedo, arrived early. Although Furiosi, 24, was raised by cradle Catholics, his parents stopped practicing the faith. Growing up, his family prayed, but they didn’t participate in the celebration of Mass and the children didn’t receive any of the Sacraments of Initiation (Baptism, Holy Communion and Confirmation).

“Something was lacking,” said Furiosi. “It was like I was well-versed about the faith, but I just wasn’t in the faith.”

Furiosi attended the University of Central Florida and found himself surrounded by people of faith, many of them Catholic. He began participating in the celebration of Mass.

“I like the tradition of the Catholic faith,” he said. “It’s been around thousands of years. You know exactly what to expect.”

Finally, he decided to become baptized, following in his sister’s footsteps.

As the gathering moved inside to the church, Furiosi took his place in the pew. “I’ve felt at peace with this for awhile,” he said.

After a welcome from Father Paul Henry, the Basilica’s rector, the celebration began. A small group of readers and deacons processed to the altar with Bishop John Noonan as the choir sang the opening hymn.

Bishop Noonan addressed the crowd, expressing great joy in the numbers of people in attendance, comprised of more than 2,000 people, including 491 catechumens representing 63 parishes.

In his homily, Bishop Noonan referenced Ash Wednesday, when the catechumens began their 40 day walk to a life of faith in Christ. “You were marked with the sign of the cross,” he said. “The cross is a symbol of the resurrection of Jesus. You were marked because you are a symbol of hope…a member of God’s family.”

Addressing the Lenten guideposts of prayer and almsgiving, he suggested ways to create more time to pray, maybe in the car, maybe participating in the celebration of daily Mass, or even saying a quick prayer in the elevator.

The assembly was attentive.

“Like Mary, we all love to proclaim the greatness of God,” he said. “Let us rejoice and be glad because we know that God is with us. We believe that with God, all things are possible.”

The presentation of the catechumens followed his homily. Catechumens and their sponsors stood when the name of their parish was called.

After the Bishop gained affirmations from the catechumens, godparents and assembly, he addressed the catechumens. “I now declare you members of the elect,” he said.

“Thanks be to God,” came the resounding response. 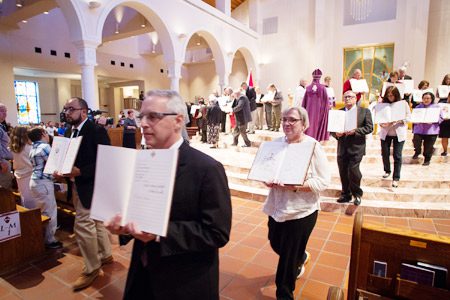 The parish representatives didn’t return directly to their seats. First, they circled the aisles of the church, holding the books open and displaying the signatures for all to see.

The choir sang “You Are Mine,” by David Haas: “Do not be afraid, I am with you. I have called you each by name.”

As the celebration concluded, the assembly began chatting, smiling and joking. One dad carried a sleeping infant on his shoulder, another pushed a stroller. One school-age girl, wearing a flowered dress, stood silently contemplating a stained glass image of the Blessed Virgin Mary.

Furiosi anticipates the next step. “This is something that has just felt right,” he said.

Baptism seals a person’s soul with a permanent spiritual mark or character identifying one as belonging to Christ. Living out one’s Baptism is a lifelong responsibility. Growing in holiness and discipleship involves a willingness to continue to learn throughout one’s whole life about faith and how to live it. A catechumen is an unbaptized person who chooses to enter a period of preparation for the Sacraments of Initiation incorporating ritual, prayer, instruction, and spiritual and moral support by the parish community. – Source United States Catholic Catechism for Adults