Sacramental Marriage through the Eyes of a Local Couple

60 Years and Still Going Strong. Alice Tabb and Dick (Richard) Kunkel were married June 11, 1955. Sixty years, six children, 17 grandchildren and seven great-grandchildren are the fruits of their sacramental marriage which was blessed again June 14 at their parish, St. Mark the Evangelist in Summerfield. They credit God for this fruitful and faith-filled marriage. 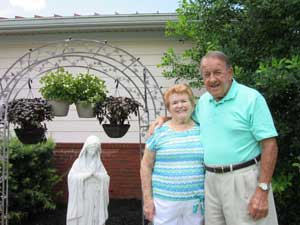 60 Years and Still Going Strong. Alice Tabb and Dick (Richard) Kunkel were married June 11, 1955. Sixty years, six children, 17 grandchildren and seven great-grandchildren are the fruits of their sacramental marriage which was blessed again June 14 at their parish, St. Mark the Evangelist in Summerfield. They credit God for this fruitful and faith-filled marriage.

“You have to try not to be selfish,” Alice explained. “You have to think only of the other and what God wants you to do.”

“She’s bringing in the big guns,” Dick chuckled. “God tells us what to do, but we have to listen.”

Talking with the Kunkels provides a clear visual image of two becoming one flesh, as marriage is described in Scripture. They not only finish each other’s sentences, but the beginnings and middles too. God – their faith – resonate throughout their conversation.

They grew up “only four-and-a-half blocks apart;” attended Our Mother of Sorrows Catholic School in Roselawn, Ohio; because they were a grade apart they knew of – but didn’t really know one another.

Dick attended the all boys Purcell Marian High School in Cincinnati and Alice the girls Regina Catholic High School in Norwood. They rode the bus together.

“When the school had events, I always asked Dick,” Alice explained.

“I was told that I should never date a non-Catholic boy. I just looked for a good Catholic fellow and there was just something there that attracted me,” Alice continued and Dick volunteered, “Yes, I was tall, dark and handsome!” They both laugh, then Alice became serious, “I just thought he was ‘the one’ and he still is.”

“She was good-looking and a red head,” Dick said. “She had a good sense of humor and was a pleasure to be with. I was an altar boy since fifth grade, even for my two years service in the Air Force.”

While Dick was in the service, they got to know one another through many long letters.

“When we did our marriage encounter in 1979, we wrote almost the same words as we did in our letters,” Alice recalled.

Following military service, Dick went to work in his father’s neighborhood grocery which eventually was bought by a major chain and Dick became a corporate executive – traveling more than they liked while Alice raised their six children.

They retired to the Villages 14 years ago and participate in the celebration of daily Mass. Alice is an altar server and Extraordinary Minister of Holy Communion. Dick also served at Mass until recently – his hands are no longer able to serve the Precious Body.

The Kunkels shared that their greatest marital challenge was as parents – talking over situations, coming to the same conclusion, and then being consistent with the children.

“You’ve got to forge together or it’s not going to work.” Dick said. “It’s what kept us together – we think so much alike.”

With such a large family, it can be challenging to keep in close contact. Thanks to cameras and computers, they are able to regularly see their family throughout the country.

“Our family is our greatest blessing,” Alice said. “They’re all great people and I remember praying that I’d live long enough to talk to them as adults. It’s a great thrill to see our grandkids grow up and make good decisions – to see them parenting.”

The Kunkels travel a lot to be present for the many family celebrations and they gather all together once a year for a reunion.