Sacred Heart 7th and 8th graders had an opportunity to travel to our nation’s capitol April 16-19. In addition to seeing many historical sites and museums, they visited the Washington Cathedral and the National Shrine of the Immaculate Conception. 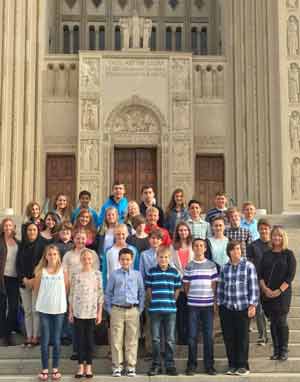 Considering itself as a National House of Prayer, Washington Cathedral, officially the Cathedral Church of Saint Peter and Saint Paul, is America’s second largest Gothic cathedral (behind St. John’s in New York) and the sixth largest Gothic cathedral in the entire world. Its pulpit has featured diverse and noted speakers, such as Bishop Desmond Tutu, the Dalai Lama, and, just a few days before he was assassinated, Dr. Martin Luther King, Jr. It ranks among the six largest cathedrals in the world and was intentionally built in a similar fashion and style of great European cathedrals, although its Gothic design is unique.

Students and chaperones took an informative, guided tour that was also interesting and entertaining. The richly colored stained glass windows, marvelous carvings, and brilliant mosaics all contribute to the grandeur of the cathedral. One of the outstanding features is the South Rose Window that uses 12 brilliantly colored vignettes and numerous other figures. Also, the Space Window, another stained-glass, commemorates mankind’s 20th-century leap into space. Students viewed a piece of moon rock brought back by Apollo 11 that was embedded in the window.

Even though it is considered the national house of prayer, no government funds were provided for construction, maintenance and operation of the Cathedral. Woodrow Wilson and Helen Keller are buried in the cathedral. While George Washington and Pierre L’Enfant envisioned a great cathedral in the nation’s capital, it was not approved by congress until 1893. The first stone was laid in 1907 with President Theodore Roosevelt present. The cathedral was not officially completed until 1990, making it the longest running construction project in Washington history and currently 700,000 people visit the cathedral each year to sight see or worship.

Another stop on the tour for the students was The Basilica of the National Shrine of the Immaculate Conception. It is the largest Roman Catholic Church in the United States and North America, and is one of the ten largest churches in the world. Sacred Heart students and chaperones were able to celebrate Mass at the Shrine, be recognized in the roll call made by the presiding priest, and received an excellent photo opportunity of its beauty shortly thereafter.

This Basilica is especially near and dear to our students because our pastor, Father John Murray, C.Ss.R., was ordained as a priest there.
Fulfilling its mission, the Basilica is a place of worship, pilgrimage, evangelization and reconciliation.

Visiting these two places of worship while on our trip to Washington, D.C. let us share in our faith with one another and allowed us to experience two places that many only have the opportunity to read about in books!