Silver Rose carries message of Life across the Americas 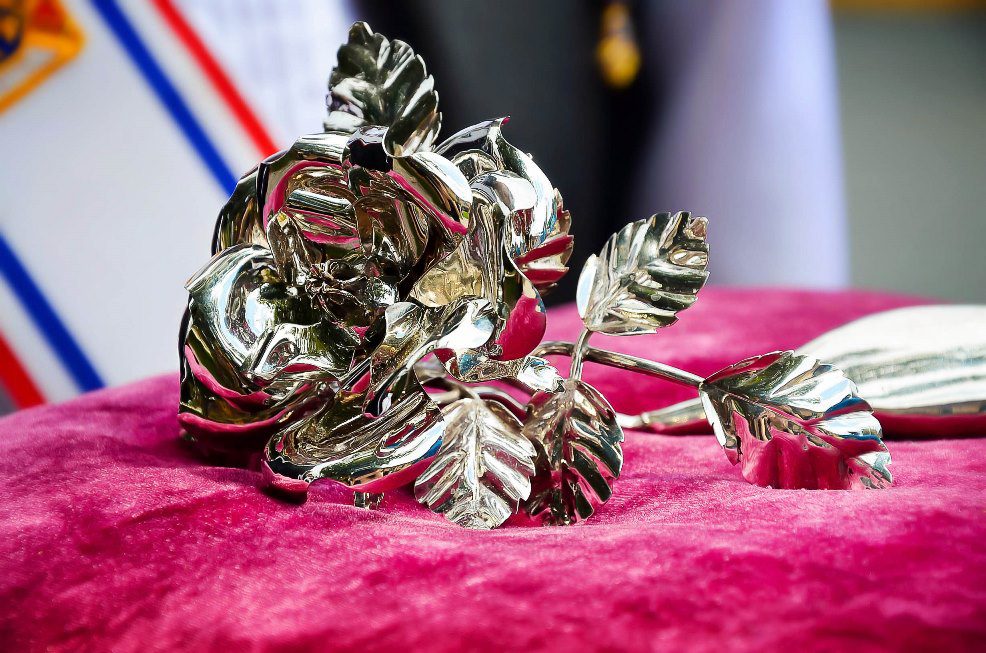 The Silver Rose, honoring Our Lady of Guadalupe, patroness of the Americas, makes a stop at St. John Vianney parish in Orlando. Made of pure silver from Mexico, this is one of six roses that will make a route from Canada to Mexico, through 47 U.S. states and five Canadian provinces. PHOTO BY ANDREA NAVARRO

ORLANDO / Two dozen dancers dressed in indigenous, Aztec attire swayed to the rhythm of the drum as part of the Silver Rose processional, July 3 at St. John Vianney parish in Orlando.

Handled only with silk-gloved hands, the single silver rose was placed in front of the image of Our Lady of Guadalupe, the patroness of the Americas, just before it was carried into the church for the prayer service.

Forty-five young people, each carrying a red rose, placed a flower at the feet of the image of the Blessed Virgin Mary as they entered the church, symbolizing the 45 years since the Roe v Wade decision that legalized abortion in the United States.  Nearly 300 people attended the bi-lingual prayer service.

“As Catholics we are are called to be a people of life and a people for life, from the unborn to natural death,” said George Annan, Grand Knight of St. Joseph Parish 5958 Council, which sponsored the event.

The ceremony included a rosary with prayers in both English and Spanish and readings from the Gospel, concluding with an act of consecration and litany of the Blessed Virgin Mary.

The Silver Rose program began in 1960, by the youth group associated with the Knights of Columbus called the Columbia Squires, as a way to honor Our Lady of Guadalupe, as well as spiritually unite the countries under her patronage.  The first year, a real rose was chosen and relayed from London, Ontario through the United States to Loredo, Texas and ending in Monterrey, Mexico at the Basilica of Our Lady of Guadalupe, in an event they called the Running of the Rose.

After the first year, the rose had decomposed but the event was so well received, that the organizers decided to run the rose again, this time making it out of silver, the precious metal most associated with Mexico.  The program continued until the mid-1990s by the Knights of Texas and Mexico, and the Our Lady of Guadalupe Province of the Fourth Degree of the Knights of Columbus, until 2001, when it was adopted as a Supreme Council program.

At that time, three Silver Roses were added, taking differing routes through the U.S and Canada.  Today, six roses run along different North American routes from Canada to Mexico through 47 U.S. states and five Canadian provinces.

“I found out 6-7 weeks ago that the rose was going to be in Florida,” recounted Chenette.  “I contacted Father Miguel Gonzalez and he thought it was a great idea.  Then we had to get everything lined up.”

With the help of St. John Vianney pastor, Father Gonzalez, Chenette met with Juan XXIII ministry leader Jose Pelagio, who also enlisted the help of other groups including one that coordinates the annual December 11th celebration of Our Lady of Guadalupe for the parish, called the Guadalupe team.  Ministry leader Maria Lisette St. Hilaire says of the experience, “We found out the rose was coming and we were really excited for another opportunity to honor Our Lady.  She touches everyone regardless of economics, education, or profession.  It is the magnificence of faith when we have a team, all working together for the same God under the same faith.  It keeps us going.”

Eighteen year old Juana Romero danced with her parents and her three sisters, who came from Groveland to take part in the Silver Rose event.  “It’s great to have the opportunity to be a part of this.  It is so beautiful and interesting,” says Juana.  Her mother Maria Morado and father Jaime Romero used to dance for festivals in Mexico and taught their children, Fatima (13) and Twins, Katelyn and Kimberly (7).

“We used to do this kind of thing in Mexico 35 years ago and decided to start it here,” explained Morado.  “It is a Hispanic tradition for many years to dance in honor of the Virgin Mary.  We are grateful to be a part of it.”