Growing up on a small island in Barbados, Ursuline Sister Bernadette Mackay, director of the Diocese of Orlando Mission Office, never dreamed that one day she would be serving God’s children living high in the mountains of the Dominican Republic 1,300 miles away from her homeland. 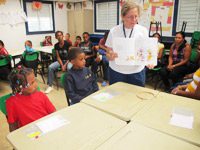 Growing up on a small island in Barbados, Ursuline Sister Bernadette Mackay, director of the Diocese of Orlando Mission Office, never dreamed that one day she would be serving God’s children living high in the mountains of the Dominican Republic 1,300 miles away from her homeland.

Even more surprising to the quiet-spoken sister is that she would be honored for her efforts – receiving an F. Sadlier Dinger Award on April 7 at the National Educators Association Convention & Expo, held in Orlando —  for changing the lives of hundreds of men, women and children, through education. The F. Sadlier Dinger Award is given in recognition of an outstanding contribution to the ministry of Catholic education.

“It was a very humbling moment because my philosophy is that I don’t work to be recognized,” Sister Mackay said. “I work to bring the fringe to the center so that all may share at the table. Still, it was a good feeling knowing that word has gotten out there.”

Sister Bernadette made her first vows on Aug. 15, 1965. She began her ministry in education in Georgetown, Guyana where she taught and served as principal at St. Agnes School. She also ministered as a principal in Barbados and Caracas, as well as a teacher in New York, before coming to the Diocese of Orlando in 1986 to serve as youth coordinator for the Farm Workers Ministry (now the Hope CommUnity Center) in Apopka. In 1991, she was named director of the Mission Office.

Sister Mackay is credited in playing an instrumental role in building the educational system in the remote areas of the Diocese of San Juan de la Maguana, our sister diocese in the Dominican Republic. Her efforts began simply in 2002 by teaching a group of 40 adults how to read. Twelve of those adults became the region’s first volunteer teachers, serving in three schools in the villages of La Cucarita, El Montazo and Los Guayuyos.

Sister Mackay admits that the early years were a struggle as the teachers were oftentimes learning alongside the students, and parents doubted the practicality of education. However, when the first students showed significant progress, enrollment shot up and parents clamored to get their children into the schools.

Today, there are five Catholic schools operated by the Diocese of Orlando and enrollment has grown from about 40 students to more than 400. Eleven high school students are foreign exchange students, studying in the United States at the five Catholic high schools in the diocese. Among the 11 are two boys who were part of the Diocese of Orlando first school in the Dominican Republic. They are on track to graduate from Bishop Moore Catholic High School in May.

“It is not about what I do, it is about what I enable them to do for themselves. That is the gift of all of this,” she said.