After professing vows of poverty, chastity and obedience local woman shares her story: 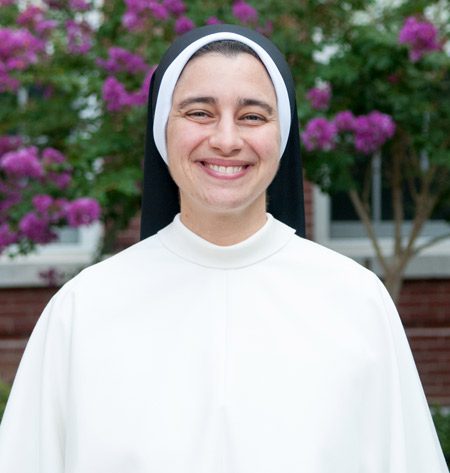 After professing vows of poverty, chastity and obedience local woman shares her story:

Recently graduated from the University of Florida, Mary Margaret Taranto was working as a youth minister when her life changed forever.

“It was 2002, and I was at the World Youth Day in Toronto,” she said. “I was listening to Pope John Paul II speak, when he said, ‘Do not be afraid.’ While I had thought of a religious life, hearing those words opened my heart to seriously consider a vocation as a religious sister.”

She began learning about different religious communities, including the Dominican Sisters of St. Cecilia Congregation in Nashville. After meeting the sisters of the congregation while on a job search in Tennessee, Taranto decided “the Lord has more for me.” She eventually was hired as a youth minister in Nashville and continued to discern God’s calling in her life.

“I was growing tremendously in my faith at the time,” said Taranto, who grew up with her family in Indiatlantic as parishioners of Holy Name of Jesus Catholic Church. “It was a valuable time to hear God’s call.”

Still, she was skeptical. New to the Nashville area, she wondered if the calling she felt was an attempt to run away from the difficulties of building a new life in an unfamiliar location. Taranto said for the next four years, she tried to build friendships and even dated a little, when she bumped into the Dominican sisters again at a youth conference.

She discovered that both she and one of the Dominican sisters had been praying for the same high school girl who was discerning a vocation to religious life. Then the sister said to Taranto that she hoped the girl heard God’s call before she lost her vocation.

“Lose your vocation? I never heard of that,” Taranto said. “Then it struck me. Was the Lord speaking to me? Was he saying, ‘Come. Come now’?. It was 2007 and I was 28 years old when I entered the convent.”

On July 25, Dominican Sisters of St. Cecilia Mary Margaret Taranto professed her final vows of poverty, chastity and obedience during the Mass for the Rite of Perpetual Religious Profession at the Cathedral of the Incarnation in Nashville.

Sister Taranto is the daughter of Vincent and Maria Taranto. She graduated from Melbourne Central Catholic High School and earned a bachelor’s degree in communication sciences and disorders, with a minor in education from the University of Florida.

After entering the convent, she received her K-6 teaching licensure for the state of Tennessee through Aquinas College. Currently Sister Taranto is teaching second grade at St. Croix Catholic School in Stillwater, Minn.

“The main apostolate for the Dominican sisters is education,” Sister Taranto said. “School wasn’t my favorite thing growing up. I never dreamed I would be a teacher. This just shows that the Lord has a good sense of humor.”

Looking back, Sister Taranto said she joyfully witnessed the vocation of married couples as well as priests and sisters. Seeing the religious fully live out their vocation helped her embrace God’s plan for her.

On Nov. 2-8, Catholics throughout the United States celebrated National Vocation Awareness Week. This annual observance, sponsored by the U.S. bishops’ Committee on Clergy, Consecrated Life and Vocations, provided an opportunity to directly promote vocations to the priesthood and religious life through prayer and encouragement.