Born in South Philadelphia, the oldest of four children, Sr. Gail Grimes never imagined being a teacher when she grew up. 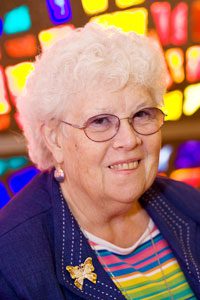 Born in South Philadelphia, the oldest of four children, Sr. Gail Grimes never imagined being a teacher when she grew up. But when she entered the Sisters of Notre Dame de Namur, a teaching community, she would begin a life of teaching that has continued for the last sixty years.

For several years Sr. Grimes served as a middle school chemistry teacher in Maryland, New York, and back at her own high school in Philadelphia. When she spent a summer working with youth in Spanish Harlem in New York City, she knew her life had changed. She felt a call to work with low-income populations. Though she saw many places with a great need, it wasn’t until she visited the community in Apopka that she felt she was where she needed to be.

“I came in January 1975 and have been here ever since” remembers Sr. Grimes. “I’ve done many different things but with the same idea of empowering people all through the years.”

In Central Florida Sr. Grimes has worked with the African American community, the Haitian community, and the Farmworker community, helping the people with everything from housing and healthcare to spiritual support and education.  Today she continues her ministry with the Hope CommUnity Center serving on the leadership team and mentoring the immigrant community.

“I don’t think I’ll ever totally retire. All the people I’ve encountered over the years have helped me to grow in a whole new way in my faith. I’ve been blessed by the people I’m with in Apopka” reflects Sr. Grimes. “It’s so refreshing to hear Pope Francis talking about opening the doors and getting out there. That’s the blessing of our life here.”