Sister Ruth Platte grew up as a “country girl” in a small Catholic community in central Michigan with her seven brothers and sisters. 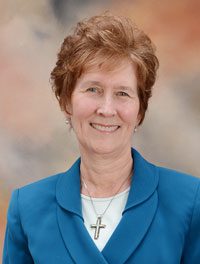 Sister Ruth Platte grew up as a “country girl” in a small Catholic community in central Michigan with her seven brothers and sisters. When her middle school class watched a film portraying the Maryknoll Sisters working among the poor in foreign lands, she felt a call to leave her small town and serve as a missionary. It is a call that has stayed with her the rest of her life.

Inspired by the dedication of the sisters who taught at her grade school and high school as well as other family members who joined religious orders, Sr. Platte continued discerning her vocation to religious life as a high school student, and on the heels of the Second Vatican Council, she joined with 90 other women in forming a new community called the Sisters of the Living Word in 1975.

“I never did become a missionary sister like the Maryknoll Sisters but I have had a whole list of mission-like assignments over the past 50 years” recalls Sr. Platte. “I have been a person who has loved bringing the Word of God to people.”

As a Sister of the Living Word, Sr. Platte has served in the inner cities of Chicago and Detroit, the rural Midwest, suburban New Orleans, the mountains of Appalachia, and now continues her ministry as Director of Faith Formation at the Catholic Community of St. Paul in Leesburg.

“Following the call to go where God leads has been the greatest challenge and joy of my life” says Sr. Platte. “It has not always been easy to pick up and move to a new ministry assignments but I have always felt the God of Faith urging me forward.  God seems to have given me a missionary heart!”