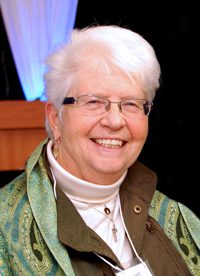 “I will give all the gifts and the limitations I have to forward the Mission of the Adrian Dominican Congregation,” Sister Patricia said in accepting the office.

Sister Patricia, an attorney, comes to her new role with a variety of experiences. She is the founding director of the Center for Earth Jurisprudence at Barry University School of Law. The first of its kind at any U.S. law school, the Center for Earth Jurisprudence seeks to develop a philosophy and practice of law that respects and protects the natural world in its own right. She has also served at Barry University as an adjunct faculty member and, since 2010, as a team member of Barry’s Office of Mission Engagement. From 2001 to 2004, she directed the Earth Ethics Institute at Miami Dade College, Miami, Florida. She has served as staff attorney with Florida Rural Legal Services, working with immigrant farmworkers in Florida, and as a civil rights attorney at the U.S. Department of Justice.

The Dominican Sisters of Adrian are a Congregation of about 700 vowed women religious whose roots go back to St. Dominic in the 13th century. The Sisters minister in 26 states; the District of Columbia; and in five other nations: Canada, the Dominican Republic, Mexico, Norway, and the Philippines. The Sisters and more than 200 Associates are organized into seven regional Mission Chapters, each under the leadership of a Chapter Prioress.