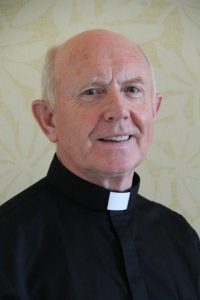 Fr. George Dunne is a member of the Congregation of the Blessed Sacrament, a religious order founded in Paris, France, in 1856 by St. Peter Julian Eymard. The mission of the Congregation of the Blessed Sacrament is to place the Celebration of the Eucharist at the center of the life of the faithful and internalized in a prayer of adoration and contemplation. Fr. Dunne is from Dublin, Ireland where he was ordained a priest in 1982. After his Ordination he was appointed Vocations Director for the Region of Britain and Ireland and in 1984 became the Director of the Student community of the Blessed Sacrament at All Hallows College, Dublin. In 1990 he was elected Provincial Superior of the Province of Britain and Ireland and occupied that position until 2002. For the next 15 years he served as Parochial Vicar of St. Stephen Parish in Winter Springs, Florida and during that time developed the Life in the Eucharist program for both Teens and Adults. Presently he is working in the Diocese of Orlando promoting Eucharistic programs and assisting at St. Stephen Parish. 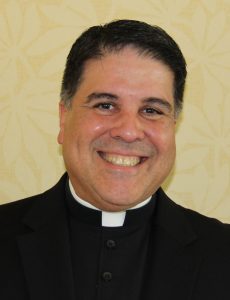 Fr. Miguel A. González is currently the Rector of St. James Cathedral, and Vicar for Priests of the Diocese of Orlando. Fr. Miguel was ordained to the priesthood for the Diocese of Orlando on May 23, 1998. He first served as parochial vicar at St. James Cathedral and was transferred to St. John Vianney Parish in the fall of 2000. Four years later, on December 15, 2004, Bishop Thomas Wenski named Fr. Miguel full-time Director of Vocations for the Diocese of Orlando. In March of 2011, after seven successful years as the Vocations Director, Bishop John Noonan named him Parish Administrator and later Pastor of St. John Vianney Parish.

In early October of 2016, Bishop Noonan named him Administrator of St. James Cathedral Parish. He was appointed Rector on July 1, 2017.

In addition to his priestly duties, Fr. Miguel is the spiritual advisor to the Orlando Council of Catholic Women and enjoys games of dominos, cooking and visiting local theme parks. Prior to becoming a priest for the Diocese of Orlando, Fr. Gonzalez worked as an on-air personality and music program director for a commercial Spanish music radio station in Orlando.

The Mission of the Catechist (English, Spanish, Haitian, Portuguese) 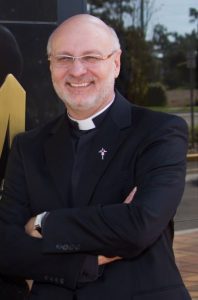 Rev. Benjamin Berinti, C.PP.S. is a Missionary of the Most Precious Blood and currently serves as Pastor of Immaculate Conception Church in Melbourne Beach.  In 34 years of priestly ministry, Fr. Ben has served as a university professor of religion and humanities; dean of Catholic campus ministry; retreat center team member; co-director of Lay Ecclesial Ministry formation; and parish pastor.  A well-respected teacher, retreat leader, pastor, author and theologian, Fr. Ben is engaging, creative and inspirational in his ministry of the Word.  He writes for the Florida Catholic’s Sunday Word column, works with Catholic radio programming at WDMC, teaches with Loyola University New Orleans Institute for Ministry, and has written three collections of spiritual essays.  In his spare time, he serves as Vice-Provincial of his religious congregation. 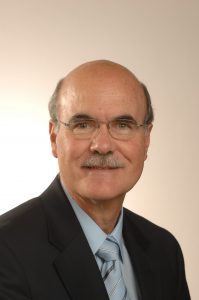 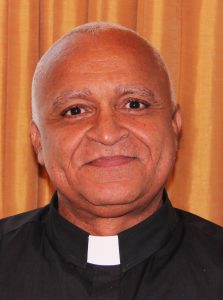 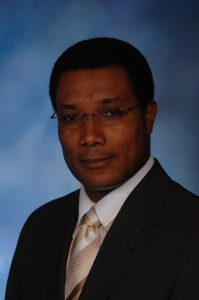 Andre Eudes Angrand is a scientist, with a concentration in Chemical Engineering. He made his career in the pharmaceutical world, with key focus on production of medicines to save lives. Andre Eudes was born in a large family of 10 children (5 boys and 5 girls). His mom and dad, who currently live in New York City, have raised their children with a strong catholic faith.  At 7 years old, Andre Eudes learned to serve Latin Masses and became an altar boy. That occurs during the “Second Ecumenical Council of the Vatican (Vatican II)”, which opened under the pontificate of Pope John XXIII and closed under the pontificate of Pope Paul VI. Andre Eudes spent his adolescent years in seminary in Haiti, for he wanted to become a priest. Today, Andre Eudes is a grandfather, a father, a husband. He was an active member in the parishes where he resided prior to his relocation to Orlando a couple of years ago. He also graduated in Community Leadership in Lafayette, Indiana and had served two terms on the board of directors of Habitat for Humanity of Lafayette, IN. He is happy to be a member of the Diocese of Orlando, FL. 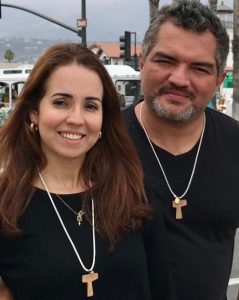 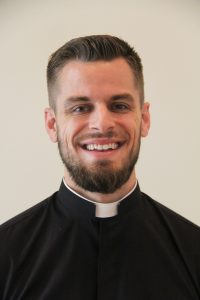 Father Benjamin Lehnertz was born into military family and has lived in eight  states. His passion for baseball would only be eventually outdone by his love for Jesus and the Church. He first heard the call to the priesthood when he was involved in youth ministry as a high school student at Holy Name of Jesus in Indialantic.

After two years at Ball State University, he was accepted by the Diocese of Orlando and in 2005 was sent to St. John Vianney College Seminary in Miami. After graduating with a bachelor’s degree in philosophy he was promoted to St. Vincent de Paul Regional Seminary for a master’s degree in divinity.

He was ordained a priest on May 25th 2013  and was first assigned to Annunciation in Altamonte Springs. Since 2015 he has served as associate pastor at Holy Family in Orlando. There he has worked together with his parishioners and staff to start a ministry for enriching marriages and revamping the marriage preparation process. Together they also have produced a new adult faith formation program called Transmission. For the past year-and-a-half Father Benjamin has been a part of the Diocese of Orlando Vocations Office, preaching vocations missions at different parishes in the Orlando area and facilitating discernment groups. He still loves youth ministry, athletics, music, cooking, and spending quality time with family and friends.

For the past thirty years, Sally served as an end of life educator and grief specialist in the community. Recently retired, she remains an active member of the bereavement team at Sts. Peter and Paul in Winter Park. 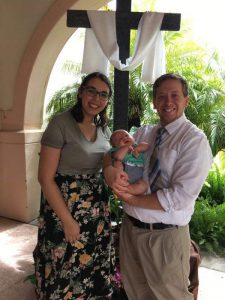 I am first and foremost a husband to my beautiful wife, Shaina, and a father to two under 2 years old, Michael and Joan. God has certainly gifted me with much. I am a convert to Catholicism from Atheism. I never believed in an afterlife or a God who loved until someone saved my life from ending and I let God in at a LifeTeen High School Youth Group in Jensen Beach, FL.

I went on after high school to study Religion and Cultural Studies at the University of Central Florida (Go Knights!). I have worked at Prince of Peace Catholic Church in Ormond Beach for the last 5 years as the Assistant Director of Discipleship leading the charge of discipleship in Youth and Young Adult Ministry.

I challenge you to not take today lightly; God has a plan for you today to know Him better. I pray I might be an instrument that He uses to help you in your mission in the Church. We need you. 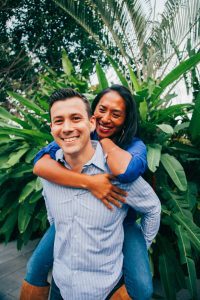 Jason and Rachel were on the founding teams for three young adult ministries in the Central Florida area. They are avid speakers, both together and individually. They cover topics from family life to theology and philosophy and pop culture to faith formation.

They are frequently sought after to speak on the vocation to marriage and St. John Paul II’s Theology of the Body. Jason and Rachel are also leading voices in the formation of young adults – how to invite, curate their faith and how to keep them from leaving the Church. They have been married for almost 11 years and have five children (one in heaven). Jason is in formation for the Permanent Diaconate and they are members of St. Joseph Catholic Church in Lakeland.

Liturgy as Opportunity for Encounter 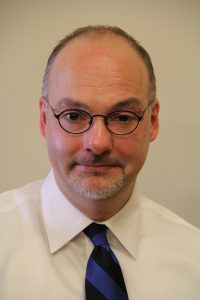 Bruce Croteau is the Director of Liturgy for the Diocese of Orlando and St. James Cathedral. Prior to his current position in Orlando, Bruce served as Pastoral Associate for Liturgy at Holy Trinity Church in Georgetown, Washington, DC.  He has more than 38 years of pastoral experience in music and liturgy; 30 years of which he served in full-time parish ministry within the Diocese of Orlando.

Having pursued graduate studies at the University of Portland in Oregon and St. John’s School of Theology and Seminary in Collegeville, Minnesota, he received the Master of Music and Worship degree from the University of Portland. His articles have appeared in liturgical resources and journals for the National Association of Pastoral Musicians, World Library Publications, and Oregon Catholic Press.

RCIA: A Path to Life in Christ 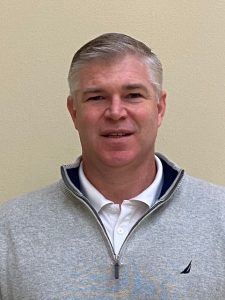 Pete Pronko is a husband, father of two and revert to the Catholic faith. Raised in a Catholic family 20 miles west of Boston, Pete walked away from the Church at age of 17. While attending college in Arizona, he experienced a spiritual awakening and became actively involved in non-denominational Christian ministries.

He spent 16 years working in Christian media with various Christian leaders. During this period, he fell in love with Scripture and felt the unexplainable pull of Christ toward something more. This relentless pull eventually led Pete back to the Catholic Church in 2004.

Currently, Pete serves as the Director of Evangelization and Family Catechesis at Annunciation Parish in Altamonte Springs. He is also in the sixth year of formation for the Permanent Diaconate. Pete lives in Longwood with his wife, Dawn, and two children, Peter and Tazi.