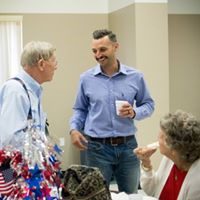 United States veterans are very important to our country. Once soldiers who defended and protected the nation, these men and women risked their lives in the process, fighting against other countries all around the world, including Iraq, Japan, and Norway to keep our country safe. St. Joseph Catholic School held a Veterans’ Mass and Breakfast on November 10, 2017 to show respect toward all veterans and to say “thank you” for their service and sacrifices. Without them, America would not have a military to protect and serve the nation.

Soldiers work very hard to train, fight, and win every battle. They accept, but are often scared that death may be an occurrence. In an interview at the Veterans’ Day Breakfast, Brian L., an eighth grade student’s father and Marine veteran, was asked how faith helped him through these hard times. He stated, “It gave me a peacefulness inside of me knowing that God will help me get home safe after it was all over.” He explained how believing God will help soldiers fight for our country is very important for their survival.