ORLANDO – During this Jubilee Year of Mercy, Catholics might ask themselves how do they become merciful as the heavenly Father, and how do they open their hearts to receive God’s mercy in our lives? 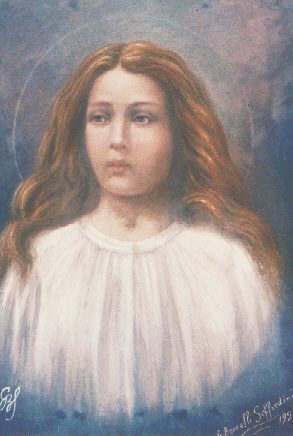 The saints of the Church could be guides. They lived during complex times that challenged them in many ways, and overcame daily struggles with faith. During the next few months, the Florida Catholic will highlight saints of mercy who blazed trails towards a path to heaven with merciful hearts. They demonstrated works of mercy and depended on God’s love and grace to make this possible.

St. Maria Goretti, Feast Day is July 6
This saint reminds us of the Spiritual Work of Mercy to “forgive all injuries” because God forgives us.

St. Maria Goretti is one of the church’s youngest canonized saints. She was born on October 16, 1890 in Italy and was one of seven children.

As a child, her family lost their farm and they were forced to work for other farmers. Her family shared a home with another family by the name of Serenelli. Her father died when she was nine years old. Her mother and siblings worked in the fields while Maria stayed home to cook, mend clothing and mind her baby sister. It was not an ideal life, especially for a preteen.

When Maria was 12, one of the Serenelli children, Allesandro, made improper sexual advances on her. When Maria refused him, Allesandro threatened her with a knife if she did not do what he wanted. She pushed him away saying, “No! It is a sin! God does not want it!”

He stabbed her 14 times before running away.

Approximately 24 hours after the attack, she died, but first she forgave Alessandro saying she wanted him in Heaven with her.

Alessandro was convicted and sentenced to 30 years in jail for Maria’s murder. He closed himself off from the world for three years until Msgr. Giovanni Blandini visited him in jail. Alessandro wrote him a thank you note, and told him of a dream he had of Maria giving him lilies which burned in his hands.

After his release Alessandro visited Maria’s mother to ask for forgiveness. She said if Maria had forgiven him, she could do no less. He prayed to Maria every day and called her ‘his little saint.’

Alessandro became a lay brother of the Orders of Friars Minor Capuchin, and worked as a gardener and receptionist at an abbey until he died in 1970.

How can you follow St. Maria Goretti’s example of forgiveness and mercy?

Starting with your own family and friends, extend forgiveness to someone who wronged you. As Pope Francis said, “Pardoning offenses becomes the clearest expression of merciful love, and for us Christians it is an imperative from which we cannot excuse ourselves. At times how hard it seems to forgive! And yet pardon is the instrument placed into our fragile hands to attain serenity of heart.”

Another way to live this example of mercy and forgiveness is to volunteer with the Refugee Resettlement Program of Catholic Charities of Central Florida. Every day, representatives of Catholic Charities extend God’s love to refugees from all around the world. By helping these families of different faiths and different nationalities, you are showing God that you want our persecuted brothers and sisters in heaven with you. The many volunteer opportunities and application processes can be found at www.cflcc.org/volunteer/.