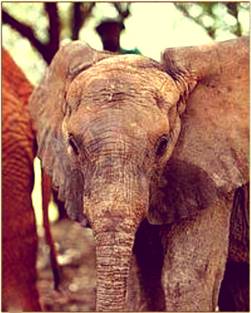 How did you celebrate Earth Day? Was it by planting a tree, or maybe picking up litter? To honor our duty as stewards of creation, St. Paul Catholic School celebrated Earth Day in a different way–by sponsoring an African elephant in Kenya. For seven years now, St. Paul’s has been fostering Kainuk, a 7-year-old African elephant. Thanks to the efforts of wildlife organizations like the David Sheldrick Wildlife Trust organization in Kenya, the African elephant is not on the endangered species list anymore.

The David Sheldrick Wildlife Trust does so much for the elephants; they take in orphan calves when they are young, in the wild, and alone. From there, they nurture them and raise them up until they are able to go back into the wild.

Our Kainuk was brought into the rehabilitation program in order to save her from issues that stemmed from a widespread drought. She was only one year old when her mother died of dehydration and she was brought into the organization’s nursery program. Now Kainuk is one of the matriarchs of the orphan herd.

The David Sheldrick Wildlife Trust organization’s mission states, “A lifetime dedicated to the protection and preservation of African’s Wilderness and its denizens, particularly endangered species such as elephants and Black Rhino.” Forty years in fact. They are a leading advocate in protecting the lives of endangered animals in Africa. They have done so well through their elephant and rhino rescue and rehabilitation program that they have achieved worldwide recognition.

It is our duty as stewards of creation to protect our planet. Earth Day is considered the birthday of the Earth and is an opportunity to spread awareness. There are many ways to protect our planet and St. Paul Catholic School did it in a unique way through including Kainuk as part of the Saint Paul family.