St Timothy Brings Christ in the Eucharist to The Villages

LADY LAKE – Since the beginning of the Jubilee Year of Mercy, parishioners at St. Timothy Parish in Lady Lake have been bringing the message of Christ in the Eucharist to the streets through weekly Eucharistic processions. 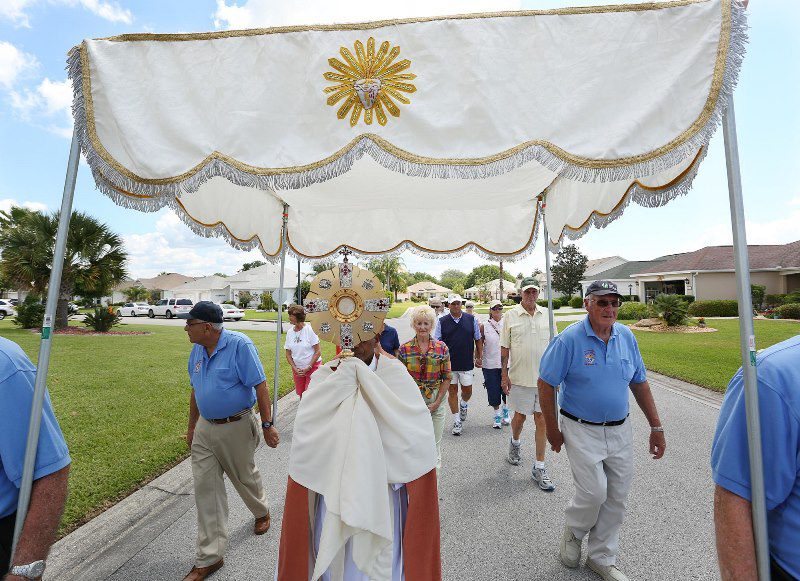 Walking the route, riding in golf carts, and kneeling at the end of their driveways, Catholics in The Villages, a senior living community, have taken part in more than 20 Eucharistic processions since last December.

“The parishioners of St. Timothy Parish have a great devotion to the Holy Eucharist through daily Mass, Benediction and our 24-7 adoration chapel. During the Year of Mercy, we have been challenged by Pope Francis to ‘bring Christ unto others’,” said Father Ed Waters pastor.

Initially, the processions which began at noon most Sundays started out small. As word spread, more people joined in, until they had about 20-25 people walking the ¾ mile route. The Knights of Columbus led the group through the neighborhood streets, while one of the three priests of the parish carried the monstrance with the Blessed Sacrament.

“People signed up for the week, then it would begin at their address and wind through their neighborhood. They told their neighbors, who came out of their houses to stand, kneel, bow or make the sign of the cross as the procession passed by. It was a very moving thing to see and do,” said parish sacristan Donna Boswell. “There are no sidewalks, so we were in the street. Cars and golf carts would stop until we passed by. People were so respectful.”

The route was kept short, about 20 minutes of walking. A recording of Gregorian chant was played during the procession. Afterwards, the priest blessed the people and everyone silently departed.

“Father Ed has been an amazing leader. He inspired everyone to get behind this movement,” said Barbara Schwartz, a parishioner who has walked in all but one of the processions which ended May 21. “It was a wonderful experience to see people join in.”

In issuing the Year of Mercy, Pope Francis has called the faithful to become living, visible signs of compassion and mercy, asking that Catholics focus more on Spiritual and Corporal Works of Mercy. In his letter to Archbishop Rino Fisichella at the approach of the Jubilee Year, Pope Francis said, “It is indeed my wish that the Jubilee be a living experience of the closeness of the Father, whose tenderness is almost tangible, so that the faith of every believer may be strengthened and thus testimony to it be ever more effective.”

St. Timothy will pause the processions for the summer, resuming again in the fall, then concluding them at the end of the Jubilee Year on November 20th.