The Catholic Faith Wears a Beautiful Coat of Many Colors

Ours is a diocese steeped in the traditions of many cultures. In fact, on any given Sunday, Masses are celebrated in 10 different languages throughout the Diocese of Orlando, said Bruce Croteau, diocesan director of Liturgy. 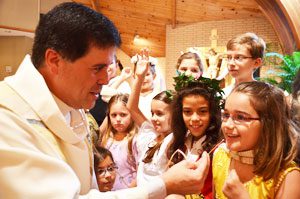 Ours is a diocese steeped in the traditions of many cultures. In fact, on any given Sunday, Masses are celebrated in 10 different languages throughout the Diocese of Orlando, said Bruce Croteau, diocesan director of Liturgy. As we embrace the diversity of our local Church, we, the faithful, come together to celebrate the identity we all have as members of the Body of Christ.

“We are a community of cultures united in God’s love,” said Father Miguel Gonzalez (pictured), pastor of St. John Vianney Catholic Church in Orlando, a community known for its multi-cultural celebrations. “How we celebrate that and make that evident is in our desire to grow in faith together. The many cultures of our Church give us an awareness of how diverse and rich we are as a Church and yet we are all one. The Catholic faith wears a beautiful coat of many colors.”

At the recent Orlando Liturgical Conference 2013, “Many Languages, One Voice,” presented by the diocesan Office of Liturgy and Music, Sandra Dooley, director of Liturgy at St. Margaret Mary Catholic Church in Winter Park, shared her expertise on bringing varied faith communities together in multicultural liturgies.

Referring to the writings of Clerics of Saint Viator Father Mark Francis, president of the Catholic Theological Union located in Chicago, Dooley said true multicultural liturgies not only employ different languages of the congregation, but also the various signs and symbols that spring from a particular culture’s interpretation of their Catholic faith.

The first step in planning a successful celebration is to form a committee represented by the different cultural groups. Allow the representatives to get to know one another and each other’s culture before proceeding, Dooley said. In addition to incorporating the different languages in the celebration of Mass, Dooley suggested also using various cultural elements – gestures, symbols, the environment and music.

For example, while serving in the Archdiocese of Los Angeles, Dooley helped plan a multicultural celebration for the dedication of the archdiocese’s new cathedral. In addition to having the music and prayers of the Mass prayed in the different languages, the planning committee asked representatives of the various communities to bring a fabric from their homeland. The cloths were draped on the altar, making an interwoven pattern.

“It takes more than words to show hospitality and give people of different cultures a sense that they are  truly ‘at home’ in the liturgy,” Dooley said. “Everyone needs to feel as if they belong. You don’t want people coming to their own church feeling like strangers.”

Dooley said multicultural Masses are not meant to be celebrated every weekend, but rather on special occasions, such as to commemorate the feast of the parish’s patron saint or during times, such as Thanksgiving, Holy Thursday and Easter Vigil, when only one Mass is celebrated.

“There is nothing wrong for people wanting to celebrate Mass in their own language,” Dooley said. “Someone once told me, ‘It’s not just that some people cannot speak English or don’t understand it. It is that they learned to pray as a child in another language. They sat on their mother’s lap and their mother sang songs to them in another language. They need to be able to pray in that language.’ It’s a matter of respect.”

In addition, she said the goal of multicultural liturgies is not to showcase the diversity of the people in the parish, but rather to celebrate our oneness in Christ.

“We are all different but in our differences, we want to affirm our unity in Christ,” she said. “So we come together to celebrate that we are one Bread, one Body.”

Father Gonzalez said the Hispanic and Anglo communities at St. John Vianney work wonderfully together in planning beautiful multicultural celebrations, still there have been lessons learned along the way.

“We don’t have the right formula yet,” Father Gonzalez said, “but it is a beautiful challenge to have as we try to learn and appreciate from each other’s cultural gifts that enhance our prayerful experience.”