The Holy Father Inaugurates the Year of Faith

“Today, fifty years from the opening of the Second Vatican Ecumenical Council, we begin with great joy the Year of Faith”, said Benedict XVI during the course of a Mass celebrated this morning in St. Peter’s Square. 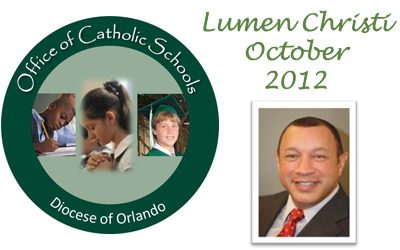 Vatican City, 11 October 2012 (VIS) – “Today, fifty years from the opening of the Second Vatican Ecumenical Council, we begin with great joy the Year of Faith”, said Benedict XVI during the course of a Mass celebrated this morning in St. Peter’s Square. Concelebrating with the Pope were cardinals, patriarchs and major archbishops of the Eastern Catholic Churches, Synod Fathers who are currently participating in a synodal assembly on the new evangelization, presidents of episcopal conferences from all over the world, and a number of Council Fathers from Vatican II. Also present at the celebration were Ecumenical Patriarch Bartholomew I and His Grace Rowan Williams, archbishop of Canterbury and primate of the Anglican Communion.

“In order to evoke the Council”, the Holy Father said, “this celebration has been enriched by several special signs: the opening procession, intended to recall the memorable one of the Council Fathers when they entered this basilica; the enthronement of a copy of the Book of the Gospels used at the Council; the consignment of the seven final Messages of the Council, and of the Catechism of the Catholic Church, which I will do before the final blessing. These signs help us not only to remember, they also offer us the possibility of going beyond commemorating. They invite us to enter more deeply into the spiritual movement which characterized Vatican II, to make it ours and to develop it according to its true meaning. And its true meaning was and remains faith in Christ, the apostolic faith, animated by the inner desire to communicate Christ to individuals and all people, in the Church’s pilgrimage along the pathways of history”.

Extracts from Benedict XVI’s homily are given below.

“The Year of Faith which we launch today is linked harmoniously with the Church’s whole path over the last fifty years: from the Council, through the Magisterium of the Servant of God Paul VI, who proclaimed a Year of Faith in 1967, up to the Great Jubilee of the year 2000, with which Blessed John Paul II re-proposed to all humanity Jesus Christ as the one Savior, yesterday, today and forever. Between these two Popes, Paul VI and John Paul II, there was a deep and profound convergence, precisely upon Christ as the centre of the cosmos and of history, and upon the apostolic eagerness to announce Him to the world. Jesus is the centre of the Christian faith. The Christian believes in God Whose face was revealed by Jesus Christ. He is the fulfillment of the Scriptures and their definitive interpreter”.

“Today’s Gospel tells us that Jesus Christ, consecrated by the Father in the Holy Spirit, is the true and perennial subject of evangelization. … This mission of Christ, this movement of His continues in space and time, over centuries and continents. It is a movement which starts with the Father and, in the power of the Spirit, goes forth to bring the good news to the poor, in both a material and a spiritual sense. The Church is the first and necessary instrument of this work of Christ because it is united to Him as a body to its head”.

“Vatican Council II did not wish to deal with the theme of faith in one specific document. It was, however, animated by a desire, as it were, to immerse itself anew in the Christian mystery so as to re-propose it fruitfully to contemporary man. … In his opening speech Blessed John XXIII presented the principal purpose of the Council in this way: “What above all concerns the Ecumenical Council is this: that the sacred deposit of Christian doctrine be safeguarded and taught more effectively. … Therefore, the principal purpose of this Council is not the discussion of this or that doctrinal theme, a Council is not required for that, … [but] this certain and immutable doctrine, which is to be faithfully respected, needs to be explored and presented in a way which responds to the needs of our time”.

“In the light of these words, we can understand what I myself felt at the time: during the Council there was an emotional tension as we faced the common task of making the truth and beauty of the faith shine out in our time, without sacrificing it to the demands of the present or leaving it tied to the past: the eternal presence of God resounds in the faith, transcending time, yet it can only be welcomed by us in our own unrepeatable today. Therefore I believe that the most important thing … is to revive in the whole Church that positive tension, that yearning to announce Christ again to contemporary man. But, so that this interior thrust towards the new evangelization neither remain just an idea nor be lost in confusion, … I have often insisted on the need to return, as it were, to the “letter” of the Council – that is to its texts – also to draw from them its authentic spirit, and why I have repeated that the true legacy of Vatican II is to be found in them”.

“The Council did not formulate anything new in matters of faith, nor did it wish to replace what was ancient. Rather, it concerned itself with seeing that the same faith might continue to be lived in the present day, that it might remain a living faith in a world of change. … The Council Fathers wished to present the faith in a meaningful way; and if they opened themselves trustingly to dialogue with the modern world it is because they were certain of their faith, of the solid rock on which they stood. In the years following, however, many embraced uncritically the dominant mentality, placing in doubt the very foundations of the deposit of faith, which they sadly no longer felt able to accept as truths.

“If today the Church proposes a new Year of Faith and a new evangelization, it is not to honor an anniversary, but because there is more need of it, even more than there was fifty years ago! … Even the initiative to create a pontifical council for the promotion of the new evangelization … is to be understood in this context. Recent decades have seen the advance of a spiritual “desertification”. In the Council’s time it was already possible from a few tragic pages of history to know what a life or a world without God looked like, but now we see it every day around us. … But it is in starting from the experience of this desert … that we can again discover the joy of believing, its vital importance for us”.

“In the desert we rediscover the value of what is essential for living; thus in today’s world there are innumerable signs, often expressed implicitly or negatively, of the thirst for God, for the ultimate meaning of life. And in the desert people of faith are needed who, with their own lives, point out the way to the Promised Land and keep hope alive. Living faith opens the heart to the grace of God which frees us from pessimism. Today, more than ever, evangelizing means witnessing to the new life, transformed by God, and thus showing the path”.

“The journey is a metaphor for life, and the wise wayfarer is one who has learned the art of living, and can share it with his brethren – as happens to pilgrims along the Way of St. James or similar routes which, not by chance, have again become popular in recent years. How come so many people today feel the need to make these journeys? Is it not because they find there, or at least intuit, the meaning of our existence in the world? This, then, is how we can picture the Year of Faith: a pilgrimage in the deserts of today’s world, taking with us only what is necessary: … the Gospel and the faith of the Church, of which the Council documents are a luminous expression, as is the Catechism of the Catholic Church, published twenty years ago.

“Venerable and dear brothers, 11 October 1962 was the Feast of Mary Most Holy, Mother of God. Let us entrust to her the Year of Faith, as I did last week when I went on pilgrimage to Loreto. May the Virgin Mary always shine out as a star along the way of the new evangelization”.