The Little Saint of Great Mercy

Pope Francis declared the new jubilee year, December 8, 2015 through November 20, 2016, as the Year of Mercy. To start off the Year of Mercy, the relics of St. Maria Goretti are currently touring America. This event is known as the “Pilgrimage of Mercy.” 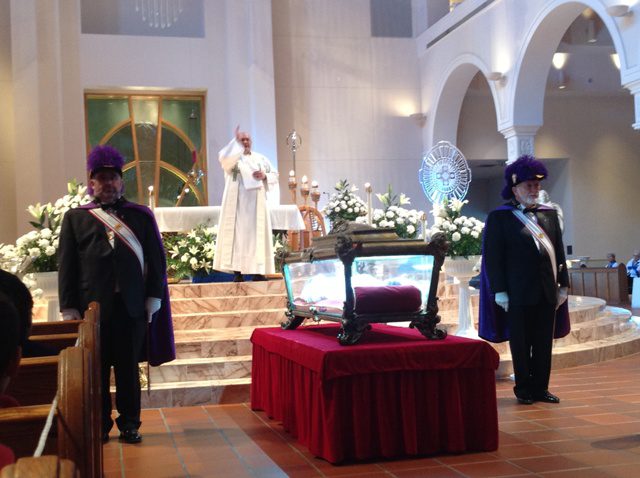 At Saint Mary Magdalen Catholic School, the seventh graders partook in a field trip to Basilica of the National Shrine, Mary, Queen of the Universe on Oct. 30 in Orlando. The objective of this unique field trip was to attend the exhibit of the reliquary holding the relics of St. Maria Goretti.

This event was special for all the students of the seventh grade because this is the first time that St. Maria Goretti’s relics came to America. Her skeletal body was inside a beautiful wax model, and the hair was from a lady who had cancer and prayed daily to this saint and was soon healed. The relics were visible through a glass box beautifully surrounded by white lilies, the flowers that have become the symbol of Maria’s purity.

Born into a poor family in Italy, Maria had to learn at a young age domestic work due to the sudden death of her father. Her next door neighbor, Alessandro, would always come to assist in chores, but he only did so to be close to Maria. One unfortunate day Alessandro tried to assault the young girl, but Maria did not give in. Alessandro lost his patience and stabbed her fourteen times. She was taken to the hospital and on her death bed, Maria’s final words were used in forgiving Alessandro. She died 24 hours after the initial attack, at the age of eleven. Alessandro was immediately caught and sent to jail for thirty years. One night he was visited by Maria in a dream. She handed him fourteen white lilies, representing her forgiveness for the fourteen times he stabbed her. After this event, Alessandro was a changed man and pursued a life of holiness. When released from jail he visited Maria’s mother begging for forgiveness which was granted.

Sofia, a seventh grader from St. Mary Magdalen felt inspired when she approached the reliquary. “The story of Maria impacted me because of her simplicity of life and her great faith. My own faith was reinforced by seeing such a young girl die for her faith, just as Christ died on the cross for us.”

St. Maria Goretti is the youngest canonized saint in the Catholic Church, and is the Patroness of young girls and the virtue of purity. We should all learn from Maria and her mother and forgive those around us, no matter what age or circumstance.