The Tableau Performed During Advent Season 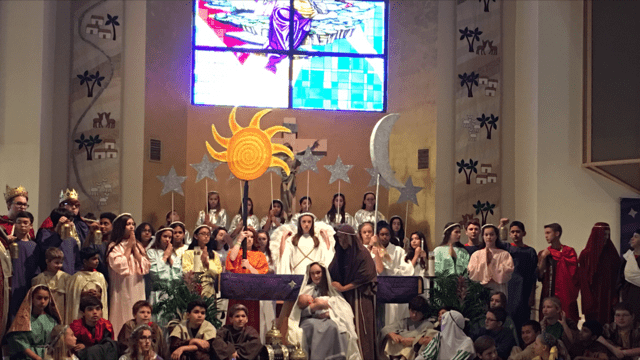 Every year the students at Holy Family Catholic School perform the annual Tableau. This story reenacts the birth of Jesus. It also tells how the earth, sun, moon, and stars came to be in the world. The performance is accompanied by the angelic voices of the fourth through seventh grade students. The kindergarten class sings Silent Night while performing motions that go with the words. Every year this faith filled presentation gets people closer to the true meaning of Christmas and continues to prepare their hearts for Advent.

In the breathtaking play, the angel of light or angel Gabriel came to Mary. She told Mary that she found favor with God and she would have a son and name him Jesus. Mary said, “May it be done to me according to your word.”  Mary and Joseph then went to three different inns, which all said they have no room for them, until the third inn realized they had an open stable in the back. Mary then had her baby and named him Jesus, just as the angel had told her.

The sun came to give the baby light followed by the moon, since the sun is too bright for the baby’s eyes followed by the yule log which came to give the baby warmth. The stars became a path for all to find baby Jesus. The angels appeared and the shepherds were frightened, but continued on their journey and found Jesus using their lanterns to light the way. The three kings looked up to the sky and saw a shining star and followed it to Jesus. They brought the newborn king gold, silver, and myrrh as gifts. The One Solitary Life portrayal explains the importance Jesus will bring to the world.

The Christmas Tableau is a tradition that gives all the students, faculty, and parents a better understanding of the whole Christmas season. It explains the importance of the birth of Jesus Christ and teaches about God’s creation. The play is an enriching experience complete with acting, singing, and the beautiful story of the birth of Christ. “For unto us a child is born, unto us a son is given; and the government shall be upon his shoulder; and he will be called Wonderful, Mighty God, Everlasting Father, Prince of Peace,” (Isaiah 9:6).