The fifth of eight children, Sr. Bernadette Mackay was born on the island of Trinidad in 1943, in the midst of World War II. 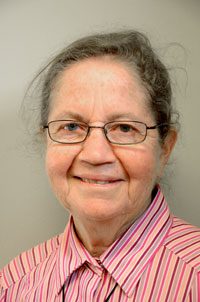 The fifth of eight children, Sr. Bernadette Mackay was born on the island of Trinidad in 1943, in the midst of World War II. Though times were hard and food was scarce, Sr. Mackay remembers a very happy childhood and one day dreamed of having a large family herself.

It was while on retreat at her Ursuline boarding school at age 12 that she first heard the invitation of God asking her to dedicate her life to him. It was an invitation she tried very hard to ignore but when the call persisted for the next several years, Sr. Mackay knew she had to respond.

In 1962 she said farewell to her parents to join the Ursuline Sisters in Barbados where she received religious formation and training as a teacher.  She would continue to minister on different islands in the Caribbean for fifteen years before moving to Orlando where she began serving the people of the Diocese of Orlando’s Sister Diocese, San Juan de la Maguana. She has continued working and living alongside the people for the last thirty years.

“Being a religious sister working with people on the fringe of society, has been my greatest gift” reflects Sr. Mackay. “I have travelled far and near, I have seen miracles happen, I have shared the spiritual journey of hundreds of men, women and young adults on mission, I have cried with grieving families, I have sat around open fires and laughed with friends, I have marveled at the wonders of creation, I have spent hours in prayer and in silence and with others. There seems to be no end to the marvels that have surrounded me these fifty years.”