Wedding Anniversaries from 1 to 63 Are Celebrated

Love was in the air for couples at the Wedding Anniversary Mass at St. James Cathedral, where couples, young and young at heart, gathered to celebrate their marriage. 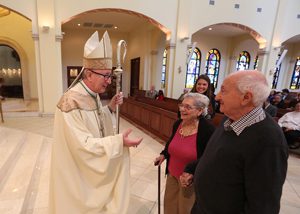 Love was in the air for couples at the Wedding Anniversary Mass at St. James Cathedral, where couples, young and young at heart, gathered to celebrate their marriage.

Bishop John Noonan celebrated the Mass on Feb. 13 and approximately 200 couples renewed their vows in front of family and friends. Bishop Noonan said marriage, like wine, becomes better as it ages.

“No one knows what love is until you have been married half a century,” Bishop Noonan said as he quoted Mark Twain. “For those who have come today, we pray that you have many more years.”

Deacon Dan Miller and his wife, Phyllis, from St. Vincent de Paul Parish in Wildwood, are celebrating their 50th anniversary this year. Miller said he believes the Sacrament of Marriage is important because it is the future of the church. 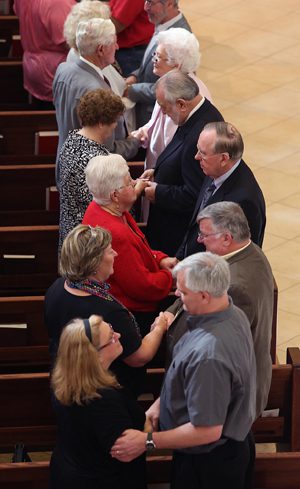 “I think it is an opportunity to have the family life as God wanted us to,” he said. “We argue—that’s part of life, but every night before we go to bed, we say ‘I love you.’”

Lynda Monckton, Diocese of Orlando director of Family Ministry, said that the Mass was originally geared toward couples celebrating a milestone anniversary, but now newly married couples are encouraged to participate to be inspired by witnessing the long-time married couples.

Among the newlywed couples who participated were Matt and Clare Freimuth, who wanted to celebrate their one-year anniversary.

It was good to see all the generations of people, said Matt, who plans to stay close to God and keep Him at the center of their marriage.

“I think marriage is a partnership for better or for worse,” he said. “You have to get through the tough times together, which will bring us closer to God as well.”

One couple, who has stood the test of time, is Vita and Vito De Stefano from Corpus Christi Parish in Celebration. They have been coming to the Mass every year for five years. The De Stefanos were one of two couples celebrating their 63rd wedding anniversary this year, and have seen each other through two bouts of cancer, open-heart surgery, and five bypass surgeries.

They attributed their success to trusting and loving each other as well as attending the Marriage Encounter weekend for their 20-year anniversary and Cursillo, a three-day weekend retreat, where the men are women are separated to get to know Jesus better.

“For me, it’s everything. I chose to marry her 63 years ago, and we’ve had our ups and downs but it’s been a lot of fun,” Vito said. “If I had to do it over again, I would do it again in a heartbeat.”

Anita Barretto of St. Mary Magdalen Parish in Altamonte Springs, who participated with her husband, Renden, said it was encouraging to see the other couples and their marriages going strong. 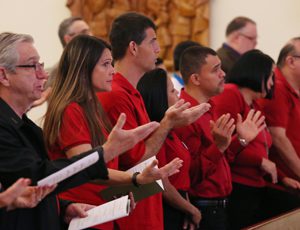 While many couples at the Mass now have grown children, the Barrettos, who are celebrating their 15-year anniversary this year, are in the midst of raising their three children, Cherub, Seraphina and Elijah.

“Marriage brings us together in a way that no other relationship does. It helps us pass on love to the next generation – to the children we have,” Renden said

While many couples face the challenge of keeping their marriage strong while raising their children, the Barrettos said their secret is to work together as a team and have their life revolve around the Gospel.

“If you place God in the center of your family, then everything else will fall into place,” Anita said.