Car lines, new uniforms and fresh school supplies were all part of the scenery as thousands of students throughout the Diocese of Orlando returned to school after the summer break. Classes began on August 13 at each of the forty-two diocesan educational institutions, including five early childhood educational facilities, five high schools and one special education school. 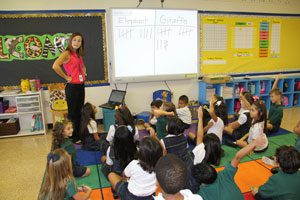 Car lines, new uniforms and fresh school supplies were all part of the scenery as thousands of students throughout the Diocese of Orlando returned to school after the summer break. Classes began on August 13 at each of the forty-two diocesan educational institutions, including five early childhood educational facilities, five high schools and one special education school.

Bucking a national trend, school enrollment in the Diocese of Orlando is rising as demand for quality Catholic education increases in the area. Parents cite faith formation and strong academics as the major reasons for enrolling their children in Catholic school.

“I spent my entire academic life in Catholic school from pre-K to college,” said Presmil Masson, who has three children at Holy Redeemer Catholic School in Kissimmee. “It’s a sacrifice my parents made for me that paid off academically, and I wanted to provide that same sacrifice and benefit for my children.”

Cindy Bell said her husband is a product of Catholic education, which seeded their desire to provide their children, now sixth and seventh graders at Good Shepherd Catholic School in Orlando, and a freshman at Bishop Moore Catholic High School in Orlando, with the same opportunity.

“The integration of community, faith, and high academic standards are norms of a Catholic education,” Bell said. “In addition, the schools encourage stewardship, living your faith, and developing strong morals, all of which are important to us. It builds a strong foundation.”

“There wasn’t even a question that we would send our children to Catholic schools,” said Colleen Carrozza, an alumnus of Father Lopez Catholic High School in Daytona Beach and a parent of a graduate and an 11th grader at the school. “In addition to the strong academic standards and spirituality, a Catholic education feeds the mind, body and soul of our children. I am also touched by how the faculty and administration embrace the students. My children are well grounded because of their experiences in Catholic schools. ”

It isn’t only Catholic school alumni, however, who are pushing enrollment up.

“My husband and I are both products of the public school system, but we wanted something more for our children,” said Yomaira Tapia, who has a son at Holy Redeemer. “We wanted to provide them with the advantage of a more holistic education and a setting where they are surrounded by children who share their faith.”

Throughout the diocese, Catholic schools have been focused on providing a quality education where Christianity is integrated. Henry Fortier, superintendent of the diocesan Office of Catholic Schools, said that difference and the challenging curriculum in a Christ-filled environment sets these schools apart.

“Catholic schools are different from all other forms of education,” Fortier said. “Catholic schools educate the entire child. That spiritual formation that takes place every day, in every subject, by every member of the school community is what sets us apart from public government schools. Academic excellence can be measured; however, the spiritual formation cannot be so easily measured.”

Parents dropping their kindergarteners off for the first day of school at St. Mary Magdalen Catholic School in Altamonte Springs spoke about the sense of community a Catholic school provides as to why they chose a Catholic education for their children.

“When we toured the school, we got a sense of a close-knit community, everyone seemed to know everyone,” said Christina Equi, as she walked her son to his classroom. “I feel as if people will look out for your children more in this environment.”

“I wanted my daughter to learn in a Catholic environment” said Jennifer Teeter, who moved with her family from Ohio less than a year ago. “I like the community environment that St. Mary Magdalen offers. Everyone is so friendly and welcoming. My daughter feels at home here.”

“The benefits to a Catholic education cannot be measured nor can you place a specific value on it,” Fortier said. “What is the value of forming students as faith-filled leaders who know Christ personally? Can there be a value placed on developing an eternal relationship with our Creator and help to give a sense of meaning and purpose to all the knowledge and skills we help develop? Catholic education is invaluable and reaches beyond the current moment into eternity.”

That’s a sentiment many parents with children enrolled in a Central Florida Catholic school share.

“It’s important for me that my children are challenged to learn and live the lessons of service and compassion in addition to strong academics,” said Isabel Estupigan, a mother of an eighth grader at Holy Redeemer and a junior at the University of Florida. “I want my children to have the very best education and here we can have that in a Christ-centered environment. It’s the best place for them.”