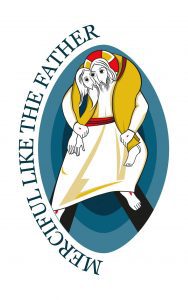 The motto Merciful Like the Father (taken from the Gospel of Luke, 6:36) serves as an invitation to follow the merciful example of the Father who asks us not to judge or condemn but to forgive and to give love and forgiveness without measure (cfr. Lk 6:37-38). It represents an image quite important to the early Church: that of the Son having taken upon his shoulders the lost soul demonstrating that it is the love of Christ that brings to completion the mystery of his incarnation culminating in redemption. The logo has been designed in such a way so as to express the profound way in which the Good Shepherd touches the flesh of humanity and does so with a love with the power to change one’s life. One particular feature worthy of note is that while the Good Shepherd, in his great mercy, takes humanity upon himself, his eyes are merged with those of man. Christ sees with the eyes of Adam, and Adam with the eyes of Christ. Every person discovers in Christ, the new Adam, one’s own humanity and the future that lies ahead, contemplating, in his gaze, the love of the Father.

For more versions of the logo in several languages, visit: Jubilee of Mercy Logo