18 men installed in Rite of Acolyte 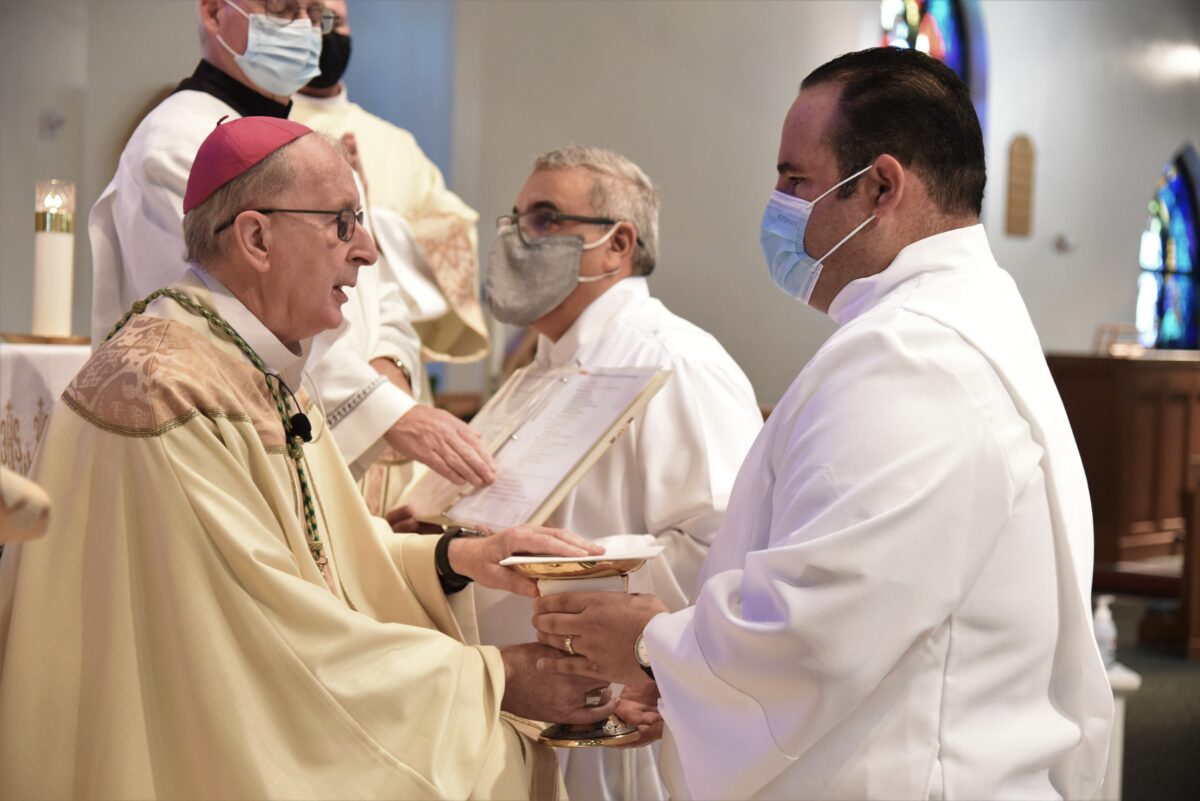 ORLANDO | “Take this vessel with wine for the celebration of the Eucharist. Make your life worthy as you serve at the table of the Lord and His Church.”

These are the words spoken by Bishop John Noonan to each of 18 men during the Rite of Acolyte at Holy Family Parish, Oct. 2. Instituted to the Ministry of Acolyte, this is the final step in preparation for receiving Holy Orders, to the Order of Deacon, scheduled for June 2022.

At age 37, Jairo Rosario is the youngest of these men. Although one must be at least 35 to enter diaconate formation, family and clergy have known this would be his path since his mid-20s.

Then one of Lydia’s uncles, since deceased, told him that he would make a good deacon. “I respected him a lot because, although he was not a deacon, he was living diaconía – a life of service to the Church, God, and His people,” Jairo noted. “At that point, I considered myself way too young for that.” Then a priest, friend of the family, made the same comment. “I kept those comments in my heart, but I didn’t see myself aspiring to that, even though I wanted to serve the Church, serve God. I didn’t know any deacons younger than 50 then,” he recalled.

Fast forward to their move to Florida. Jairo and Lydia, parishioners at St. Ann Parish in Haines City, prayed for guidance on how to serve the Lord. Lydia had been a catechist for years. One day, the two of them went to receive the Sacrament of Confession. Lydia went first, then sat in a pew to pray. Jairo followed and after pastor, Father Alfonso Cely, gave him absolution, he said to Jairo, “I want to say something to you. I was thinking about the diaconate. Have you considered being a deacon?”

The question bubbled up inside of Jairo like air trapped underwater, rising to the surface. It conjured memories of past comments mixed with his own desire to serve God. “An invitation like that, now that I was more than of age, is powerful,” said Jairo. “For me, even more powerful because I was just finished with the Sacrament of Confession. In my mind, I just mentioned everything that I have done wrong and what I receive is an invitation to serve God.” He realized it was an answer to his prayers, asking for guidance regarding how to serve and become holy. He was humbled by the thought.

Jairo joined Lydia and sat in the pew beside her. She immediately noticed in his face something was going on. “What happened?” she asked. He told her he was asked to consider becoming a deacon. “Just seeing her reaction – her face was glowing, her eyes were watering, her smile was big and beautiful…” Jairo recalled. “She took hold of my hand and said, ‘Yes.’ Her ‘yes’ was affirmation and approval – the two things a deacon must have from his wife before entering formation.”

Lydia remembers the moment clearly. “God called Jairo in a peculiar way,” she said. “I realized it was not a call from men, but from God.  For us to say ‘yes’ to God is the most important thing. We come into this world to serve Him and to gain for His kingdom. So we are willing to give our youth. We are willing to offer our home in service of the Lord. I accompany Jairo with much joy and love, helping him fortify his faith.”

That was December 2015. Jairo entered formation in January 2016.

Diaconía means servant; acolyte means ‘one who assists’. The General Instruction of the Roman Missal, 98, states, “The acolyte is instituted for service at the altar and to assist the priest and deacon. It is his place principally to prepare the altar and the sacred vessels and, if necessary, to distribute the Eucharist to the faithful as an extraordinary minister.” The acolyte differs from an altar server in that his primary responsibility is to serve in the sanctuary during liturgy. He differs from a sacristan as the sacristan serves more behind the scenes, before and after Mass.

In a society where it seems one is always expecting to be served in some way, Jairo finds the call to serve, not only inviting, but invigorating. In the Ministry of Acolyte, these men will set the altar table, assist the priest or deacon during the celebration of the liturgy, and participate in the Mass as Extraordinary Ministers of Holy Communion.

Bishop Noonan explained, through the previous Rite of Lector, “You have heard the Word of God and lived the Word of God, have embraced the Word of God – now you are willing to bring God’s message to others” through the Rite of Acolyte. “The most beautiful way you do it is through the Eucharist. You bring Christ to others. That is the gift you’ve been empowered with today. You are going to take Christ and bring Him to those who are sick, imprisoned, in need in the hospital, at home, infirmed.”

By Glenda Meekins of the Florida Catholic, October 6, 2021