19 men to proclaim the Word of God 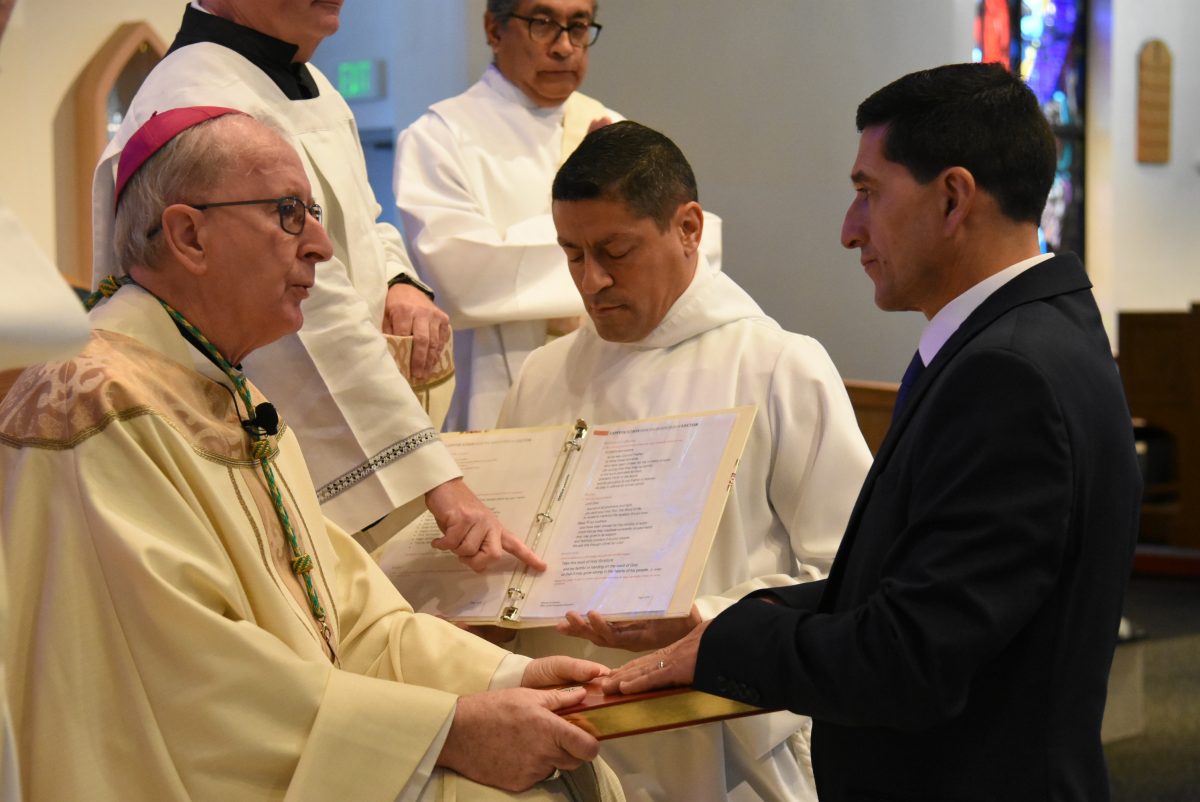 Deacon candidate Jorge Gómez places his hands on the Book of Gospels during the Rite of Institution of Lectors, as Bishop John Noonan says, “Take this book of holy Scripture and be faithful in handing on the word of God, so that it may grow strong in the hearts of his people.” (GLENDA MEEKINS)

ORLANDO  |  Nineteen men in preparation for the diaconate received the Rite of Institution of Lector Oct. 22, committing them to proclaim the Word of God.

Pews of Holy Family Parish filled with almost 100 deacons and more than 40 wives to support the class of 2024 as they reached this milestone. The Rite of Lector entrusts diaconate candidates with reading Scripture during Mass and the Liturgy of the Hours.

“The Ministry of Lector is given to all candidates for Holy Orders during the course of their formation.” Deacon Dave Camous, director of permanent diaconate, explained. “The ministry is conferred by Bishop John Noonan in a special liturgical rite promulgated by the Apostolic See. All men who are candidates for the permanent or transitional diaconate must receive the ministries of lector and acolyte prior to Ordination.”

Deacon Camous said the instituted lector should exercise his ministry for a suitable time before being presented for the ministry of acolyte, to be better disposed for the future service of the Word in his potential ordained ministry. In the next 20 months leading to Ordination, these men will further “develop the charisms that God will call them to use in service to the People of God,” the deacon added.

For many, it has been a long, hard road requiring arduous hours of study, dedication to formation, and most of all abandonment to God’s will. Francisco Peralta, a parishioner of Good Shepherd Parish in Orlando, said the road of discernment he has taken for the last five years has been “a little uncertain.”

“One gives his fiat, but doesn’t know if he is able to fulfill that yes, because the study and time requirements are great,” he said. “One disposes himself to God’s plan, but life always brings circumstances that make you question whether experiences are a sign not to continue. Perhaps it is not the moment.”

He explained this creates uncertainty about the ability to accomplish the task before him. Peralta is an accountant and realtor, and devotes two to three hours per night to study. Fortunately, his wife, María, has remained steadfast in her support.

“Now, I don’t know how I did it. It overwhelms me. (María) has always been the motor, always motivating me, encouraging me in my moments of doubt,” he said amidst tears. “The reality is it’s been many hours of study, many hours of wanting to honor my promise to God, yet being afraid I would fail Him. I want to do right by Him. It has not been easy, and it has cost me a lot. But I am very grateful to have arrived at this moment; to look back and realize all I had to do was to trust in Him.”

Peralta realizes there is still much ahead, but receiving the Rite of Institution of Lector assures him God would not bring him to this point without a greater purpose.

“I am close to the finish line,” he said. “I know now I have to surrender even more so that I make it even better than I have so far.”

Jorge Gómez, of St. Borromeo Parish in Orlando, agreed it has been a path with obstacles. He said he could not have done it without the support of his wife, María, his pastor Father Ralph DuWell, fellow parishioners, and of course, the deacons who have encouraged him along the way. Surprised at how quickly the time passed, he recalled attending the information meeting in 2017, which set him on this path to the diaconate. Gómez credited the Holy Spirit, to whom he has commended himself for guidance.

“I have grown much spiritually, intellectually and I know God has planned greater things, so He is preparing me for that,” he said. “The Rite of Lector allows me to proclaim the Word of God, in the Holy Mass. It is a great responsibility because I have been chosen by God to be His voice at the ambo. I know the Lord is speaking through me to His people and I must be conscious that this is an immense responsibility.”

By Glenda Meekins of the Florida Catholic staff, October 27, 2022