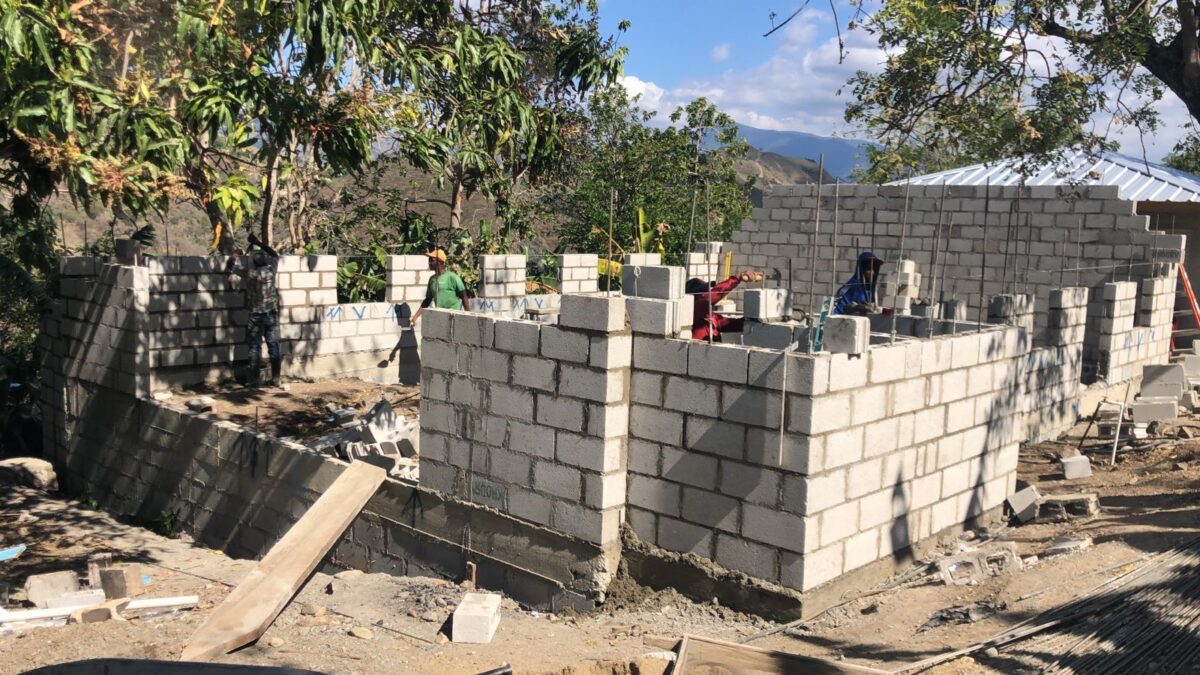 LA CUEVA, Dominican Republic  |  A small village in the Dominican mountain range of Las Lomas is in the process of building a new chapel to continue glorifying the Lord. With the help of Diocese of Orlando mission volunteers, this community now challenges surrounding communities to be their own light on the hilltop.

Over several years, life-changing modifications in La Cueva have transformed the small village from an isolated town at the end of the mountain ridge to a thriving community growing in education, structure and faith. A new water system in 2019 continues to supply water to their homes thanks to a gift of land that enabled an aqueduct. This laid the foundation of hope that would follow. Currently, the community is building 35 new homes along with the chapel, planned for completion by the end of summer.

Showing their investment in the community, residents are assisting in the build while Luis Aybar, an engineer and fruit of the mission’s education program, oversees the project locally.

Father Fred Ruse recalled his start in La Cueva in 2006 when it was only accessible by foot or mule. He recognized a vibrant spiritual community and would celebrate Mass with them once a week, occasionally spending the night in a tent on the floor of the then-makeshift chapel.

Shortly after Father Ruse’s arrival in 2006, a group from the Diocese of Orlando worked with the community of La Cueva to refurbish the chapel, however, “now to be getting a totally new one, larger even, is a wonderful gift,” Father Ruse said.

The former chapel was falling apart as the wood started rotting away. Although improvements were made and a coat of paint brightened the space, Father Ruse knew this time would come. The chapel has always been the place of gathering for this close-knit community, so a more stable, permanent structure needed to be built.

Primary funds came from Our Lady of Lourdes Parish in Melbourne. Raquel Cespedes, the parish’s leader for Missions Ministry, said they were familiar with La Cueva since they had worked there for the installation of the water system. Today, residents of La Cueva use an unoccupied home to celebrate Mass.

“We cared so much for everyone there that we wanted to give them something that everyone could enjoy,” Cespedes said. “This is how we (thought of) building a new chapel for the entire community.”

The original La Cueva chapel was the only one in the nine mountain communities without a tabernacle because it was difficult to reach due to floods and the rising river. Father Ruse helped institute the importance of including a tabernacle in the chapel shortly after he arrived.  The original tabernacle, donated by St. Matthew Parish in Winter Haven, will also be a part of the new chapel.

The mission office wanted to create this new chapel with a stronger reverence by sectioning off an area for the Blessed Sacrament. Ursuline Sister Bernadette “Bernie” Mackay, director of the Diocese of Orlando Mission Office, explained this would allow the people of La Cueva to have a deeper understanding of the Eucharist as well as a place dedicated for prayer.

“The primary role of the chapel is to center the faith of the community by providing a space for their work as the faith community in prayer and Sacraments,” Father Ruse said. “It serves as a symbol for them as a faith community.”

As the new chapel will focus on creating a space of worship, Sister Mackay said they were in desperate need of upgrading pieces like the altar, now a simple table often used for school students or meetings. She called up Father Ruse and the very next day he secured an altar, donated by St. Brendan Parish in Ormond Beach. It will be shipped to the Dominican Republic upon the chapel’s completion.

“That’s the thing with the La Cueva project, as with most other projects, you dream something and God provides it immediately,” Sister Mackay said.

Next on the agenda will be to find stacking chairs in good condition that match the interior décor of the chapel. The current benches are very old and have no back. The plastic chairs are broken and falling apart.

Sister Mackay also hopes to find two kneelers for people to pray before the Blessed Sacrament. The tabernacle from the former chapel will be the only item that will remain as they transition into the new building. One of Sister Mackay’s dreams is to have a large baptismal font, replacing the large basin which sits atop a rickety table that served as their former altar.

“It’s not about looking good. It’s about creating a space to worship and invites prayer,” she added.

It is a dream come true for Sister Mackay to see the people of La Cueva develop their potential as a Christian-based community. When she reflected on her experiences with the people of La Cueva, she recalled the Gospel of Matthew: “You are the light of the world. A city set on a mountain cannot be hidden. Nor do they light a lamp and then put it under a bushel basket; it is set on a lampstand, where it gives light to all in the house. Just so, your light must shine before others, that they may see your good deeds and glorify your heavenly Father” (Mt 5:14-16).

By Lana Kaczmarek, Special to the Florida Catholic, February 23, 2022