A Call to Sacrifice: Diaconate Rite of Candidacy 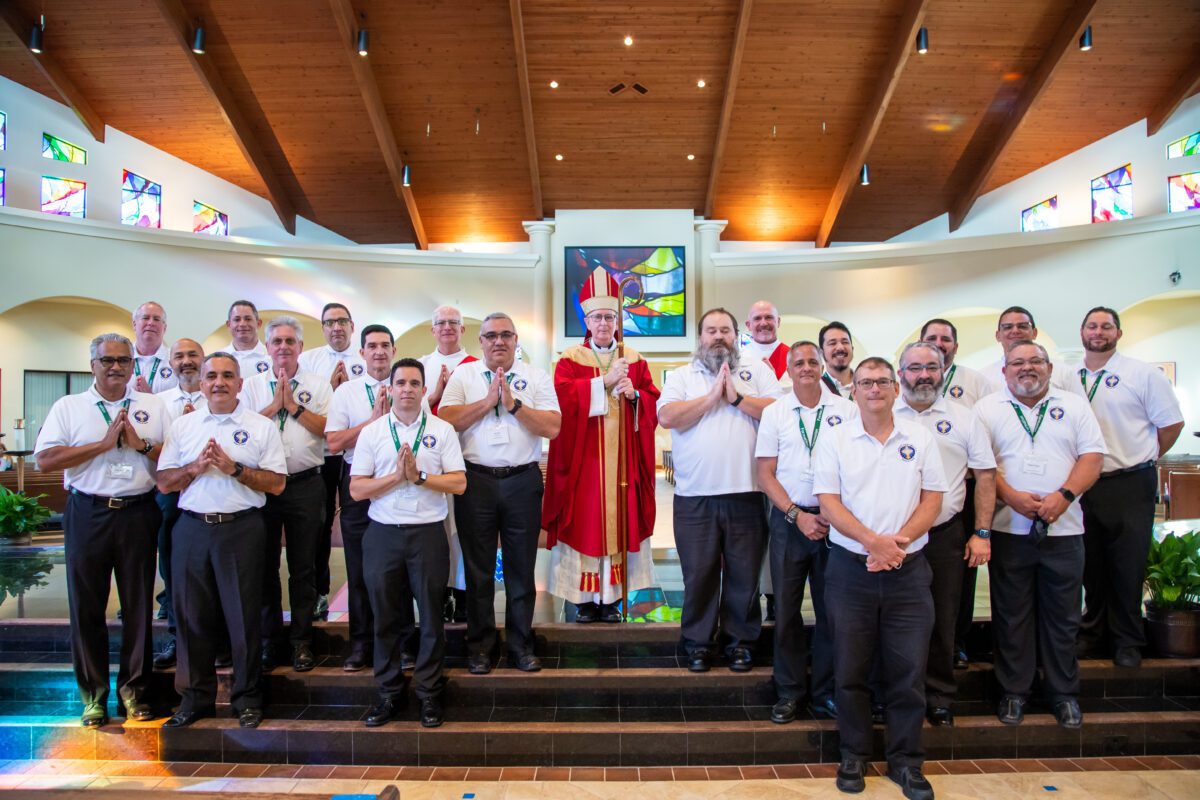 For Bryan Zornik, there was no giant, neon sign from God. No fanfare. No sudden, life-altering moment. Rather, he felt a constant tug on his heart. That feeling continued to grow until it led him to seek more information about how to enter the permanent diaconate.

“After a number of years praying about [the diaconate], it became irresponsible to not check it out,” Zornik said.

Ten years ago, he returned to Mass, the Sacraments and actively participating in his parish, Annunciation Catholic Church in Altamonte Springs. Then around 2016, he noticed the diaconate kept coming up in prayer.

“It’s kind of an unbelievable thing,” he said. “I never would have guessed 15 or 20 years ago that this is where I’d be at this point in my life. It’s overwhelming and joyful all at the same time.”

On August 14, Zornik joined 18 men in taking the next step in their diaconate journey. After completing their first two years of formation, the men participated in the Rite of Candidacy at Sts. Peter and Paul Catholic Church in Winter Park. He likens this step of moving from an aspirant to a candidate to going from dating to engagement – another level of commitment to the Church.

Zornik was accompanied by his wife, Maryanne, at the Rite of Candidacy. A wife of a married man must always provide her consent in order for him to enter or continue the six-year diaconate formation and ultimately agree he is called to Ordination.

During the Rite, the men publicly proclaimed their will to offer themselves in sacrifice to God and the Church as permanent deacons of the Diocese of Orlando.

“In a radical way, it is a self-offering of the gift God gave us, our life, back to God for Him to do with as He pleases,” said Deacon Dave Camous, director of diaconate formation. “This choice of servanthood stands in sharp contrast to secular society in which we are formed to be masters of our own destiny. I’m not sure any man fully understands it at the time of Ordination, but he is voluntarily surrendering the direction his life will take completely back to God.”

Bryan and Maryanne, both work full-time and have two boys. Juggling family life, extracurriculars, and the academics and service required of diaconate formation can be tough.

“But God finds a way,” Maryanne said. “I am truly grateful because we have found a community of help through family and friends who will take our boys to Mass and sporting events when we are on a formation weekend. You have to figure out what is most important. This is what God wants us to do. I will never come between Bryan and God.”

As a convert to the Catholic faith in 2014, Maryanne said when she read about the diaconate, she learned it’s about bringing Christ outside to the people. A deacon is called to service through word, liturgy and charity, and the expression of the service is based on the unique gifts God has given each man.

“[The diaconate] fits him; I see it,” Maryanne said. “Being in the hospitality industry, Bryan is comfortable with everyone. He’s really good at empathizing and listening so that he’s able to walk with someone and bring Christ to them. Watching him is inspiring.”

Deacon Camous references the sixth chapter in the Acts of the Apostles as being when the diaconate was established as a necessary component to meet the diverse needs of the Church. As the number of priests increased during the Middle Ages, the perceived demand for deacons declined. The Second Vatican Council restored the diaconate as a permanent order for men to share their own charisms to minister to the growing needs of the community.

One of Zornik’s favorite ministries to support is visiting nursing home residents. After celebrating Mass on Sundays, he enjoys conversing and getting to know them.

“Some of them are really alone,” he said. “If somebody is struggling with something, they open up and talk and unload. And you can tell by the end, that whole conversation…is the prayer. I get incredibly humbled by it whenever I can be present with people in that way. I know that this is what God’s asked me to do. It’s all for serving the people of God on God’s time table. You find Christ in everyone. You never get tired of it. We are a servant Church and we are at our best serving others.”

By Dana Szigeti, Special to the Florida Catholic, August 20, 2021