A family’s sacrifice for Mary and Jesus 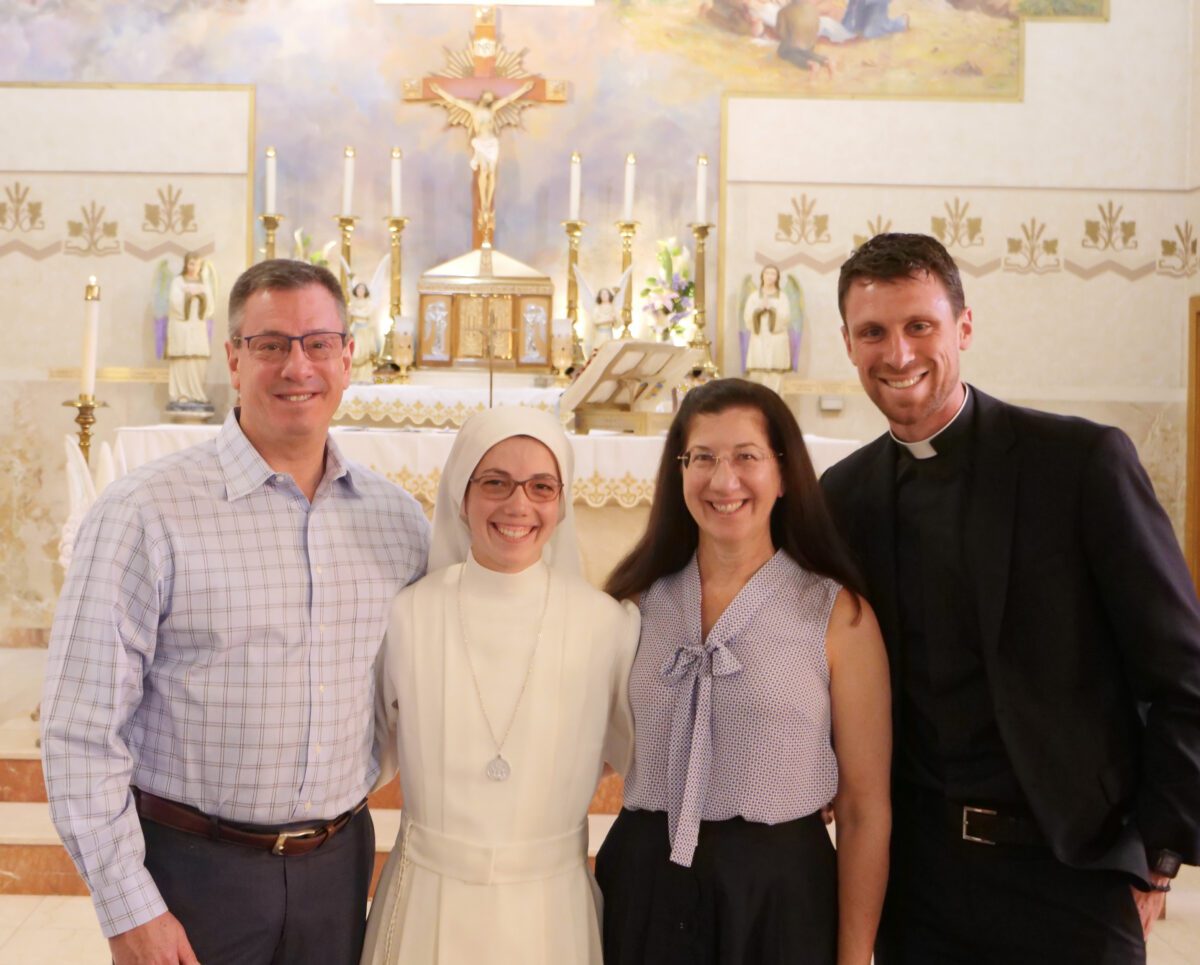 ORLANDO | This is a cloistered year for Sister Grace Kupiszewski. She will not see her family for two years. She will miss her first nephew’s Baptism. She will miss the wedding of a close cousin. It is unlikely she will spend her annual family vacation with relatives in the usual place again. She misses her family. Yet Sister Kupiszewski has no regrets. After a year of postulancy with the Mercedarian Sisters of the Blessed Sacrament, she entered the novitiate Aug. 22, 2021, on the feast day of Queenship of Mary. She hopes to make her first profession of vows in two years, when she turns 30, the same age when Jesus began His public ministry.

The first year as a novitiate is the only time the Mercedarian Sisters are cloistered. Focused on Mary and Jesus in the Blessed Sacrament, “This is the time of testing to see if we can live poverty, chastity, and obedience,” Sister Kupiszewski explained. Although only recently becoming a novice, she said, “It’s been beautiful. I can tell there are graces that come with novitiate and I can tell it’s going to be a lot of transformation and trials too.”

The former St. Margaret Mary parishioner was raised with a strong Catholic foundation within her family and in Catholic schools. She recalls being in middle school when a panel of sisters came to share their vocation stories. She had never seen a sister before. Students were told most of them would be called to marriage, “but there may be one of you out there called to religious life.” One religious added, “If you feel something on your heart right now, hold on to that.” Grace did, but did not recognize it as her call until graduate school.

When it came time for her Confirmation, she chose St. Bernadette as her saint. She had seen the movie as a child and connected with her. “I loved her name,” she said laughing. “She is also very small, like me.” Sister Grace is 5’1”. She noted Bernadette also had asthma, like herself. “She was very simple and that beauty attracted me.” Because of this Sister Grace’s devotion to Our Lady of Lourdes grew to the point that, after she received her master’s degree in physical therapy, she walked El Camino de Santiago de Compostela for one week, beginning in Lourdes, France.

By then she had already made her decision to join the Mercedarian Sisters. In truth, she was ready to go months prior, but her parents, Stan and Cathy, asked her to complete her degree. Because a religious cannot enter an order with debt, Sister Grace moved home and worked as a physical therapist for a year to pay down her school loans. At Lourdes, she felt another confirmation from God, understanding she needed this pilgrimage before a year of working.

Working for a year in her profession “was one of the most beautiful years I’ve had,” she said. “I can see very clearly why God had it be that way. There were so many miracles through that year, as well as the extra time my family needed of living at home.” And He has put her skills to good use, aiding one sister in her recovery after knee surgery and assisting many others.

Her parents, older sister Sara and younger brother Paul savored their year together. The journey has been difficult. Letting go is seldom easy, but her mother acknowledges the Mercedarian Sisters and their daughter have tried to make it as “gentle” as possible. The community is very family oriented, one of the key reasons that convinced her this was where God wanted her.

“I have such a great love for my family that supersedes everything else,” Sister Grace said. The Mercedarians are an active, contemplative community. “Just the love that this specific community has for family immediately gave me so much peace. It was a peace that came from God because I can’t explain it,” she said. She felt Him saying, “Yes, this is what I want; Yes, this is the community; Yes, this is the time that I’m going to provide you to be able to communicate with your family.” She learned she could receive emails every day and reply and speak to family once a month, write five letters a month and had two weeks each year for family visits, with exception of her canonical year – the first year as a novice.

She is not alone in her vocation. “It’s so beautiful because the vocation is not just mine. My parents are in a new vocation as parents of a religious. It is a recognition that this is not just a sacrifice God is asking of me. He’s asking it of the whole family.” She said she is grateful for her family’s support, especially seeing “the honesty of how difficult it’s been for everyone, my siblings included.” For Sister Grace, the distance is still the hardest part. “Missing family 100%. We all have different crosses in life that God is going to give us. Mine is definitely this sacrifice God is asking of me.”

For Cathy, “It’s just hard not to have very much contact with her… It’s hard and it affects you every day.” She is used to almost daily communication with her daughter, but is grateful for the order’s appreciation of family. On one of their previous visits, she and Stan were invited to stay in their guest house and even given a vehicle to drive. “They are very welcoming,” Cathy noted. “I can see why (Grace) loves it. They’re all wonderful.”

Cathy admitted the limited contact “is hard to understand in my brain. I kind of understand it in my heart -that it is how they 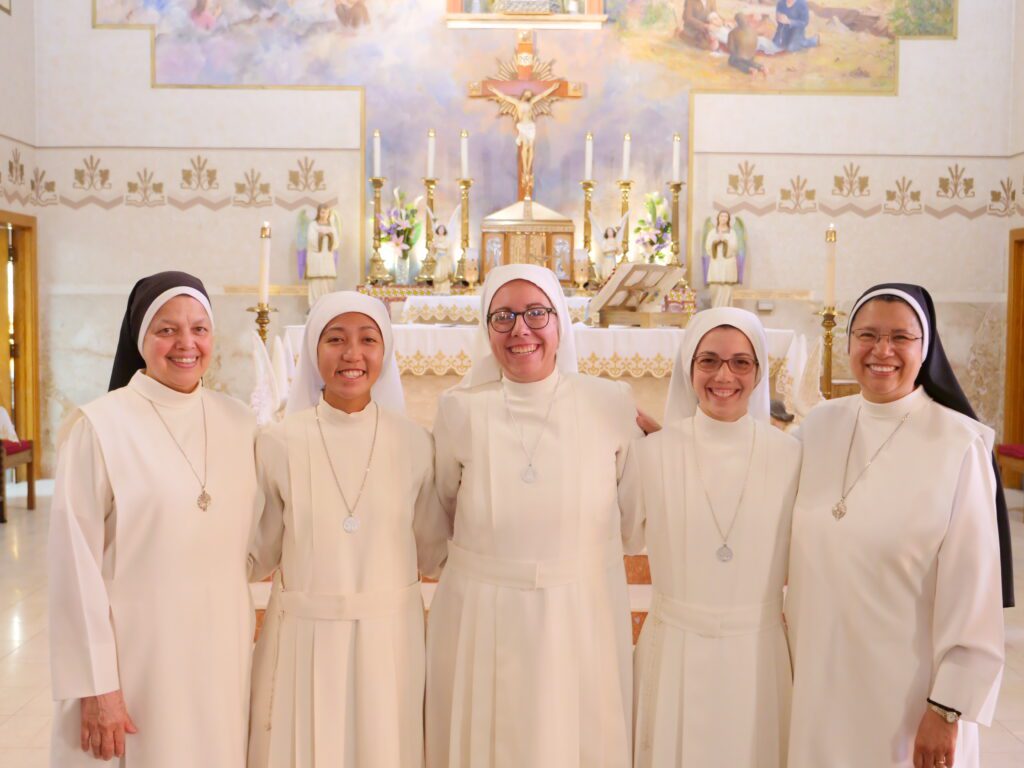 need to do it to accomplish all they need to do.” She is keenly aware of the Sisters’ busy day and frequently gets on their website to learn more and nurture her connection.

“They’re very joyful, very prayerful, but silly and they love each other. They try and have a lot of fun,” she said. “The joy is Grace is very visibly happy and they are a really nice group.” In fact, eight of the 16 Sisters in the Cleveland convent are former Catholic Gators from the University of Florida. The Mercedarian Sisters are slowly increasing their presence in Gainesville and Baton Rouge where they focus on their healing ministry.

Sister Grace will profess her final vows anywhere between the next 4 to 6 years. “Knowing that God has called each one of us here; that we’re responding to that call and living in His love,” brings her the greatest joy. She adds, “To have felt that outpouring of mercy from Him and to respond to it—to know that I am participating in His will for my life – there’s nothing better than that.”