A new age of women religious, just in time 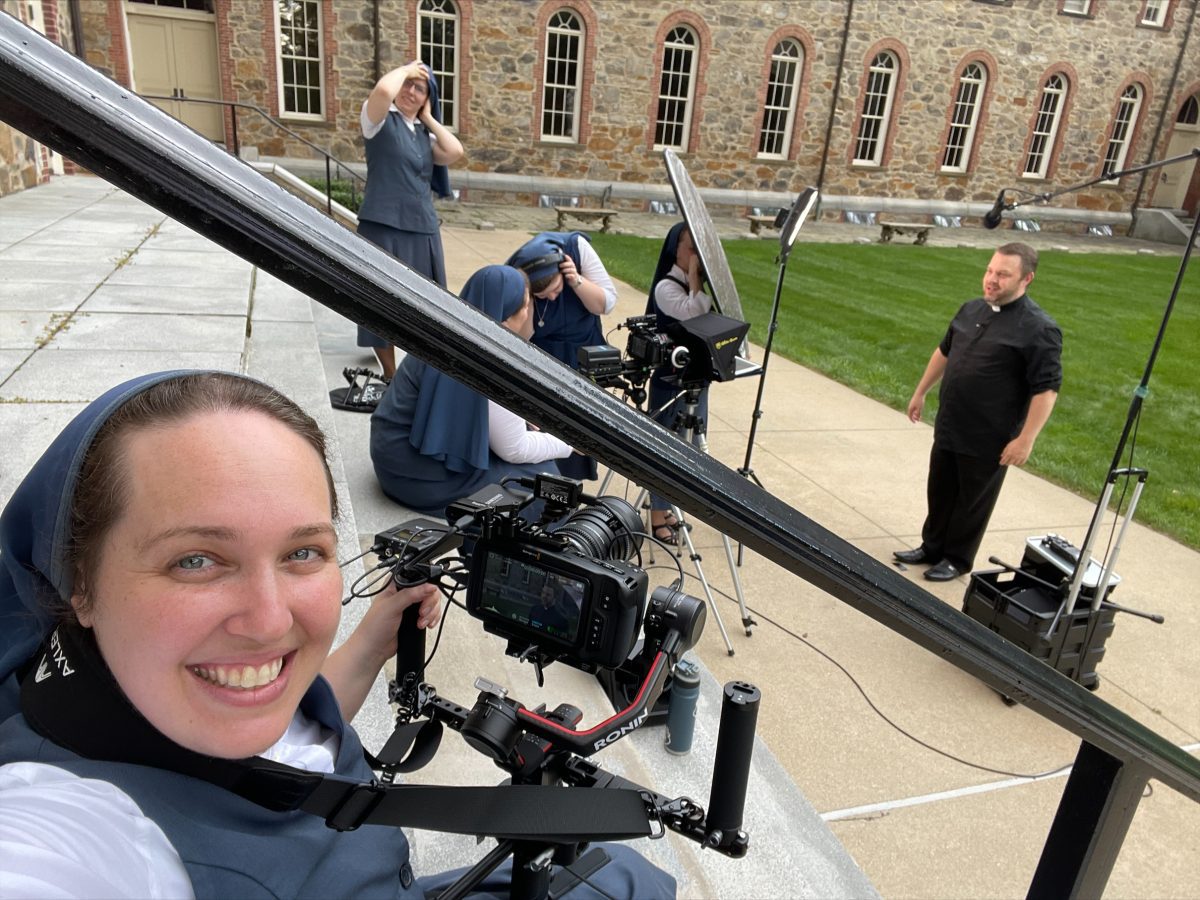 Daughters of St. Paul Sister Carly Arcella shoots a video for a new Advent series. Her order focuses on communication as a form of evangelization. (COURTESY)

ORLANDO  |  As reports of those entering religious life claim doom and gloom for the future of men and women religious, the new “sister” is focusing more on mission than numbers, fully embracing her charisms and responsibility of caring for the aging in her community.

A look at the numbers would intimidate any young woman contemplating her vocation. The Center for Applied Research in the Apostolate (CARA) states a decline of about 75% of women religious since 1965, in a period when the U.S. population has risen from 194 million to 326 million.

According to the National Religious Vocation Conference, 87% of men and women in perpetual vows are over the age of 60, a statistic that is unchanged since 2009. Of the 48 sisters in the Diocese of Orlando, the average age is 74. Only two are under 40. So, what does this mean to young novices entering the dawn of their religious life?

Does the microcosm within the Diocese of Orlando allow viewing the future through a more optimistic lens?

Growing numbers of young orders like the Servants of the Pierced Hearts of Jesus and Mary, established in 1990, offer hope with more women discerning and the recent Ordination of two priests.

Attracted to a simple life of community and prayer, each order evangelizes through their own charism or gift. The community’s charism is still a driving force for discerners — not the viability of the order, but the mission. As the saying goes, “God does not call the equipped. He equips the called.”

Sister Catherine Noecker is a member of St. Francis of the Neumann Communities, and serves as moderator for women religious in the diocese. She recalled the year she entered the order, 1959, when there were 27 aspirants. She said the burden on younger sisters has been noticeable.

Sister Noecker’s order recently received their first novice in 20 years — Sister Maise Nz. When asked about whether she was concerned about being the youngest in the congregation of sisters averaging age 80, Sister Nz said “no.” Her Chinese heritage places great value on the elderly, which makes her “feel right at home” in the congregation. The novice looks forward to sharing in an intergenerational community and the guidance and wisdom of those who have walked the path before her.

After professing perpetual vows in July, Sister Carly Arcella acknowledged her community is “re-looking anew at the quality of life and spaces for our seniors to live happy, healthy lives in community alongside us.”

“The burden does not weigh us down in mission, but builds us up in community, in intercessors, in mutual love and prayer support between younger sisters striving ahead and older sisters supporting us in wisdom and in prayer,” she added.

Sister Arcella’s optimism stems from growth within her order — the Daughters of St. Paul. In the past 10 years, 22 have entered and 10 discerned not to continue during initial formation. Of the 22 who entered, 17 were in their 20s when they entered, and five were in their early 30s.

The order’s charism is communication as a means of evangelization. Best known for their publications, today it is challenged to adapt a strong social media presence. Currently, she is working on a video series for Advent, noting the sisters feel a need to integrate more video into everyday communications.

“For me, reading the Word of God is the deeper part of the relationship,” Sister Arcella said. “That relationship often begins on social media — the reel, the short YouTube, the Instagram reflection, the podcast interview.”

She added the mission of evangelization points them “to fearlessly pick up the new means for the sake of the Gospel.” Understanding the role of communication in today’s society means watching things like Netflix and always watching the credits that follow video productions.

“It’s a sacred moment of prayer for the people who worked on the project and for those that will be watching it,” she said.

As the new generation work fearlessly, they know they do not walk alone. Blessed James Alberione, founder of the Daughters of St. Paul, wrote in the order’s beatitudes: “Blessed are the walkers of God, who in the mystic silence of the convent study the ways of the world, and on the morrow walk them to reach souls.”

Sister Deborah Marie Borneman is a Sister of Sts. Cyril and Methodius, and serves as director of mission integration at the National Religious Vocation Conference. She said since social media tracks followers it can be used as a platform to promote vocations to religious life. She regarded it as a “wise investment because of the numbers of people using it today.”

That search for community continues to be among the top five reasons people are attracted to religious life, and their particular institute, she said. “It’s one of the unique aspects of the vocation of religious life.”

Sadly, a joint 2020 study through the National Religious Vocation Conference and the Center for Applied Research in the Apostolate, revealed 12% of the more than 700 religious institutes in the United States (of these, more than 500 are for women) have chosen to no longer accept newer entrants after “prayerfully and intentionally” discerning to move forward in living their vows until the last member dies.

Among the reasons are the absence of newer members in the past few years and no anticipation of receiving candidates. Amidst the sadness of this reality, there is the beauty of a new way of thinking. “Unlike previous generations to religious life, they recognize stewardship involves divesting of empty buildings, underutilized property, and sponsored institutions to live more simply, utilizing human and material resources to benefit the neediest,” Sister Borneman said, adding orders also recognize the need for diversity.

Servants of the Pierced Hearts of Jesus and Mary Sister Gianna Grace Perino serves associate director of vocations in the diocese. She said the young people of today “are responding to the Lord’s call with a courageous fiat — a ‘yes’ – a response that is full of the deep and abiding love they found in the father’s heart.”

“We see the future of religious life as a bright future – a future full of hope,” she continued. “During the pandemic and in the following months/year, a great many young people took advantage of the silence to pray about their vocations. And this trend continues. They are asking big, fundamental questions of themselves and of the Lord.”

By Glenda Meekins of the Florida Catholic staff, August 25, 2022