A quilt of valor 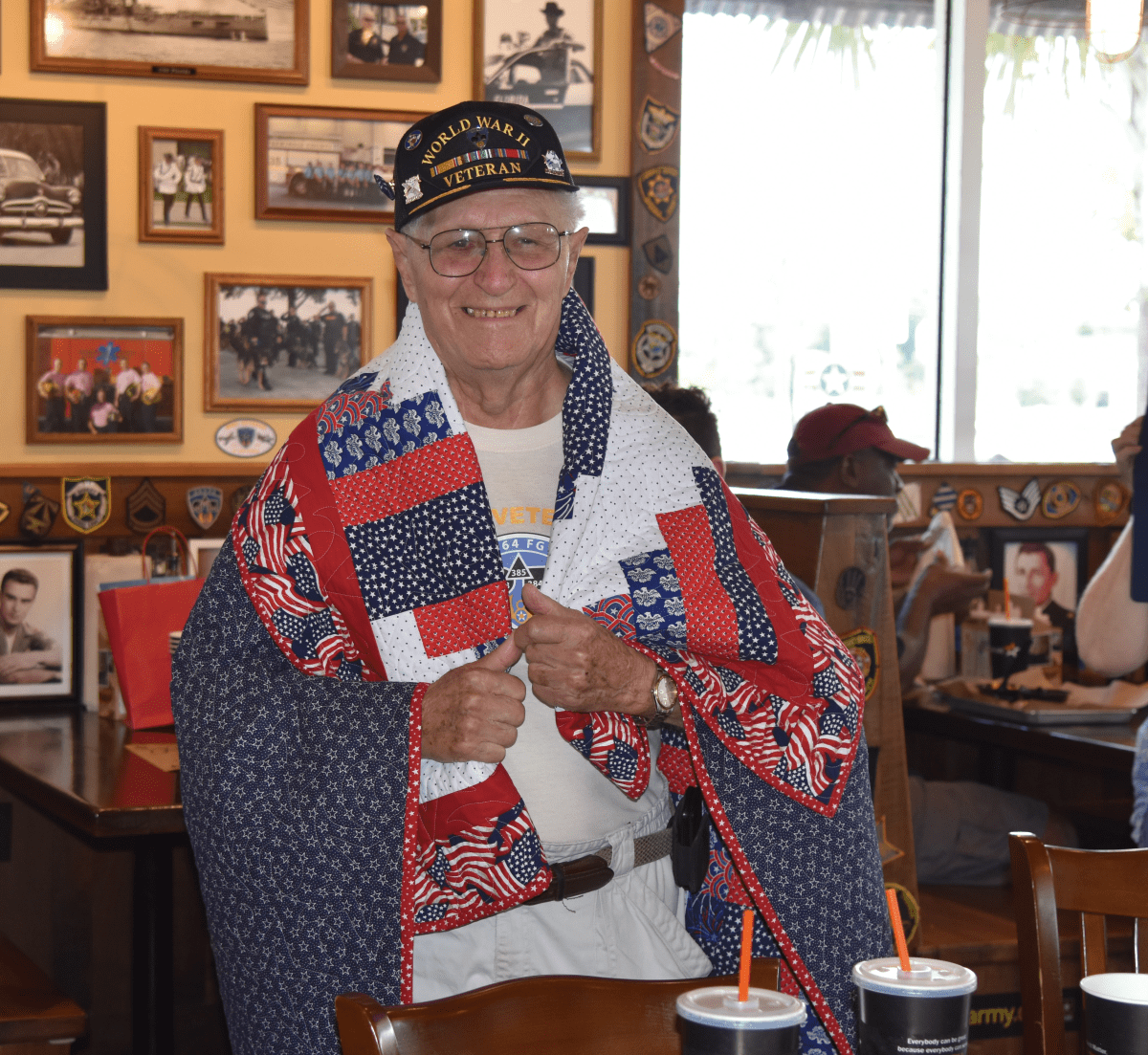 Louis Barretta, a parishioner of St. Stephen Parish in Winter Springs, is presented with a Quilt of Valor for his service in World War II. (GLENDA MEEKINS)

Barretta, a parishioner of St. Stephen Parish in Winter Springs, was a soldier in what’s been called the deadliest conflict in history. On Aug. 22, he was awarded a Quilt of Valor for his service in the 364th Fighter Group of the 383rd Fighter Squadron of the U.S. Army Corps.

Just out of high school, Barretta tried to enlist in the Navy Mohicans, a special flying group, but they had reached their quota. Before he knew it, he said, “Uncle Sam pointed his finger at me and said, ‘We want you!’” It was 1942.

Stationed in England for two years at the Royal Air Force Honington, he had trained to be a supply sergeant for the pilots, linemen and ground crew for P38s. Arriving in England, the U.S. Air Corps changed gears and used P51s, which escorted bombers to Germany.

Barretta recalled their planes taking off around 5 a.m. and seeing their contrails. The day before D-Day, he said everyone was called out to the flightline to paint a strip of white on the bottom of the planes to distinguish them from enemy aircraft so they would not be shot.

Almost five years ago, Barretta and his wife, Nellie, were sitting at church one Sunday when a gentleman seated next to him asked about his WWII service. He shared Mission BBQ in Oviedo was giving free meals to WWII veterans Dec. 7 – Pearl Harbor Day. There he met Leigh Anne Schwarz, community ambassador for the restaurant. She welcomed him back and even gave him his own booth with a photo of him shortly after he joined the U.S. Air Corps. Barretta still calls ahead to reserve his booth.

Of the original estimated 1,200 soldiers in the 364th group, only eight remain. Moved by the gesture, Barretta said modestly, “This has never happened before. I’m not sure why I’m getting it.”

When he thinks about his war days, Barretta said , “Prayer helps a lot.” He went to church in town during the war and today he is sure to say his daily prayers.

Today, he offers his time in ministry at St. Stephen. He even recruited his grandson to help in the annual flea market.

Impressed with Barretta, Schwarz recommended him for a Quilt of Valor, from the Quilts of Valor Foundation, an organization who awards healing, comforting quilts to active-duty service members and veterans touched by war. She wanted to do something special for him.

“He’s just the sweetest soul and what a big deal,” Schwarz said. “He’s so, so important and he just doesn’t think he was.”

Melissa Mathews, central Florida coordinator for the program, quilted Barretta’s award. Made of three layers, the top represents communities and individuals. The batting at the center provides warmth, bringing hope and healing. The back is the strength of the quilt supporting the layers, representing the strength of the recipient, support of their family, community and nation.

Mathews calls it “a work of heart” and a form of national service. “(The quilt) is a visual reminder that you are never alone, and never forgotten,” she said.

On hand to celebrate his recognition were Barretta’s daughters, sons-in-law and a grandson, plus numerous friends, his former pastor Father John Bluett and parishioners from his senior group.

By Glenda Meekins of the Florida Catholic staff, August 25, 2022