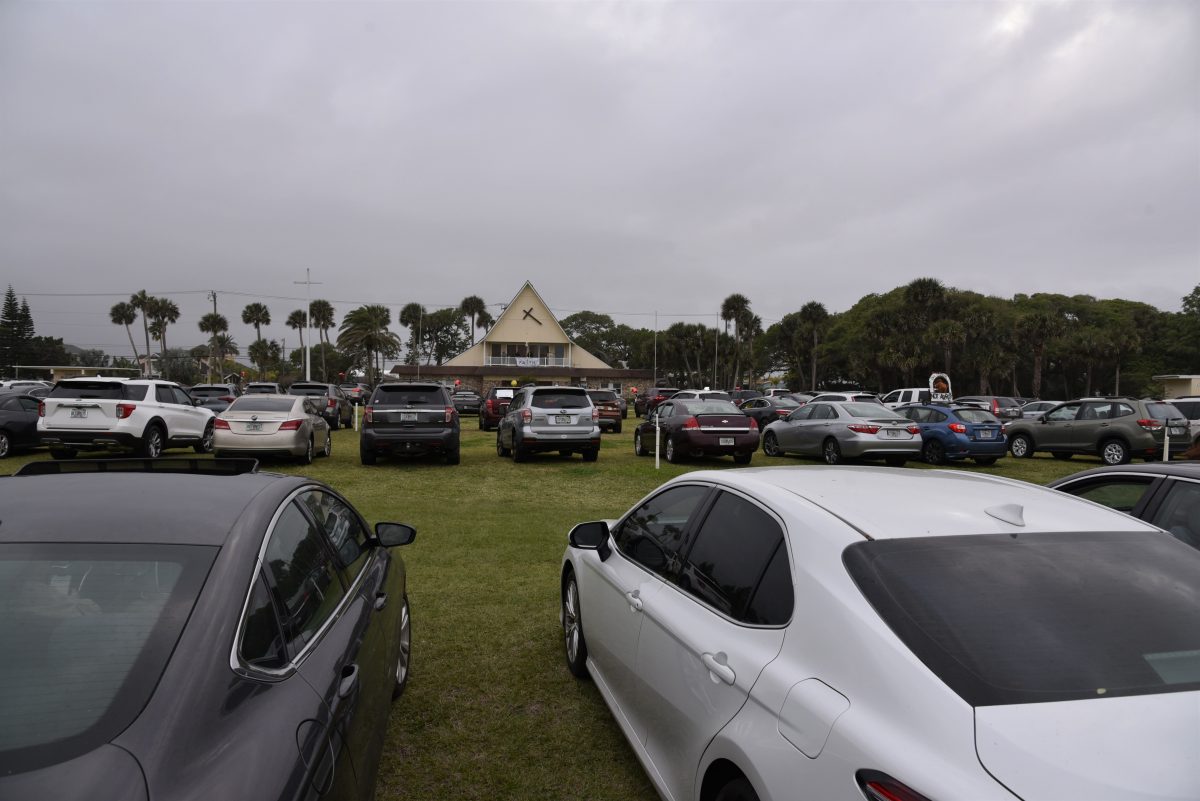 Fighting Against Injustice Towards Harmony (F.A.I.T.H.), an ecumenical coalition of 32 religious organizations meets March 22 at the Daytona Beach Drive-in Church to honor CDC protocols for safety. The church welcomed 350 members and another 350 joined online to support affordable housing, help for the homeless, restorative practices, and civil citations. Elected officials present pledged their support for the social justice causes. (GLENDA MEEKINS)

DAYTONA BEACH | As evening descended, nearly 350 people pulled into the Daytona Beach Drive-in Church for the annual Fighting Against Injustice Toward Harmony (F.A.I.T.H.) Action Assembly, March 22. The church is one of 32 congregations of faith that make up the ecumenical organization. A venue ideal for pandemic times, everyone remained in their cars and tuned their stations to hear speakers provide updates on two primary efforts: addressing affordable housing and homelessness and increasing restorative practices through civil citations instead of juvenile arrests. F.A.I.T.H. progressed on both fronts. Another 350 members joined online.

“We are trying to create housing opportunities for working families and ensure youth learn from their misbehavior without being defined by it,” said Father Phil Egitto, pastor of Our Lady of Lourdes Parish in Daytona Beach. “This is an incredibly difficult time for the whole world. We know that in our community those on the margins have suffered the most. In the midst of a global pandemic, our congregations found a way to make our voices heard for justice.”

Joan Campanaro of Our Lady of Lourdes, reported on the First Step Shelter. The shelter is a homeless assistance center and longtime project of F.A.I.T.H., which provides shelter and social services for the homeless, and assistance with the transition to permanent housing. Currently it supports approximately 45 people. Campanaro also reported on the recent opening of its “safe zone”, a covered outdoor space where homeless persons can find respite for up to 24 hours if they are not willing to participate in the shelter program.

Work in the area of affordable housing continues. According to the National Low Income Housing Coalition, a one-bedroom apartment in Volusia County requires someone working full-time to earn more than $17 per hour. The problem is the mean renter wage in the county is $13.35 per hour. Estimates indicate a shortfall of 16,000 units to accommodate families in need. F.A.I.T.H. is working with elected officials to implement a Housing Trust Fund, following the model of at least 700 counties in the U.S., including Orange and Seminole Counties.

Mayor Derrick Henry of Daytona Beach, Mayor Russ Owen of New Smyrna Beach, and all council members present committed to creating the fund by the end of 2021. They also agreed to conduct a study in the attempt to implement “linkage fees”. These fees link development of real estate to the production of affordable housing. The fees are absorbed by developers and used by cities to build and rehabilitate homes for low-income families.

In 2018, F.A.I.T.H.’s Education Committee discovered minority students and those with disabilities were more likely to receive out-of-school suspensions than others. According to the Florida Association of Psychologists, Florida students who are suspended are 10 times more likely to drop out of school. Seeking to remedy the problem, F.A.I.T.H. advocates met with Volusia County school leaders and achieved the implementation of restorative practices in most county schools. Restorative practices seek to keep students in school while maintaining a system of accountability and building healthy relationships between students, peers, and staff. The program is largely successful; however, F.A.I.T.H. continues to work with the schools that are not participating.

In closing, Father Egitto noted, “We are united in the pursuit of a better Volusia County and are calling on our elected officials to unite together and use their power to make change for the common good.” He said F.A.I.T.H. is in it for the “long haul”, building a coalition for justice.