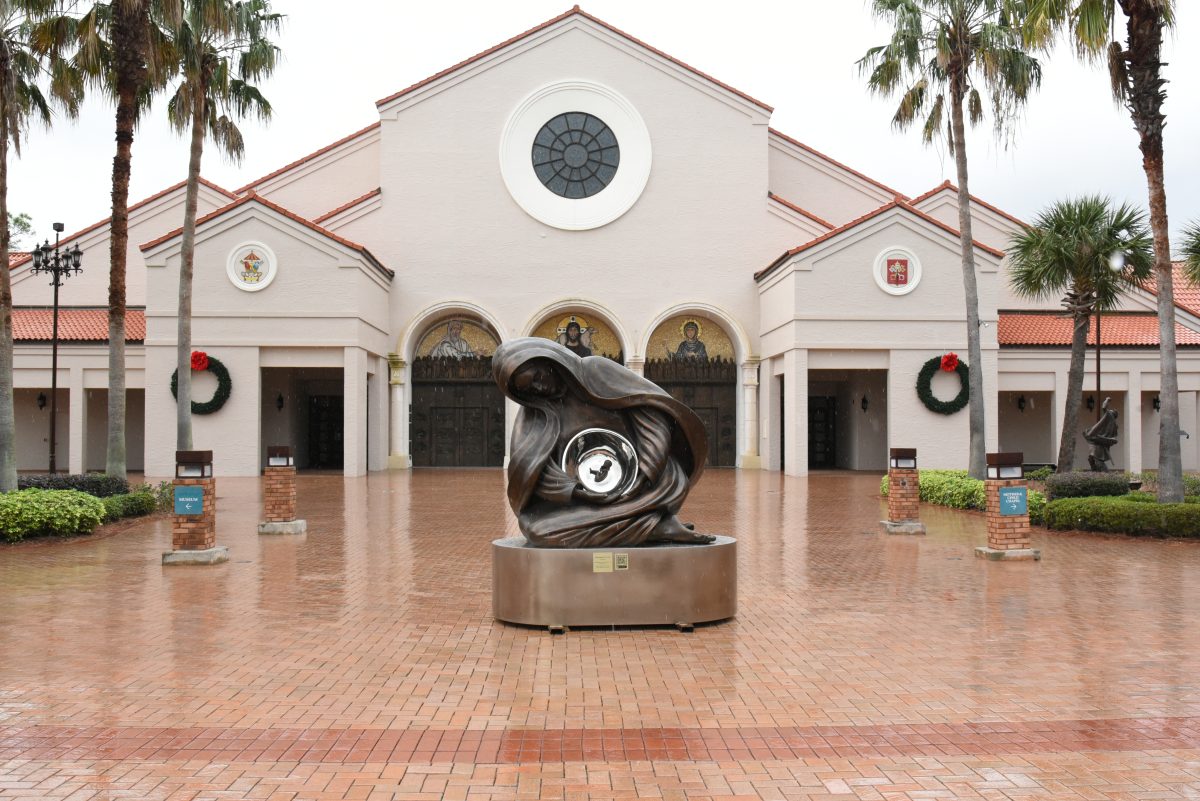 A sculpture of Mary and the Unborn Jesus titled “Life Monument” created by Canadian scuptor Timothy Schmalz is installed at the Basilica of the National Shrine of Mary, Queen of the Universe in Orlando, Jan. 5, 2023. The sculpture is making its way to Washington DC and arrives in Orlando just in time for several local and state pro-life events. The original sculpture is in Rome. (GLENDA MEEKINS)

ORLANDO  |  Stepping off the bridge on one’s way into the Basilica of the National Shrine of Mary, Queen of the Universe, one is struck by the imposing bronze sculpture, Monument to Life, depicting the Blessed Mother and unborn Christ child in her womb.

The rector said he was glad to receive the monument prior to the Mass for Life, Jan. 20, held at the basilica. He sees it as a preparation for what is to come.

“When guests step off the bridge, they see this structure and they see this Monument to Life. Then they know this is what we’re all about. Everything we do is about life,” he said, sharing what he sees and admires about the piece of art. “You see in the womb a small child, but this small child will become something more. In the Christmas season we ask, what child is this? And that is the child. We see the development of this child as we see the development of Mary. This young girl who becomes the Queen of the Universe. We see Jesus in the womb who becomes the Savior of the world. Therefore, it makes sure that everybody who is small, in the womb, is allowed to come to birth so they can become who God intends them to be for the world.”

A pilgrim visited the shrine days after the installation and shared the juxtaposition of the sculpture of the young mother and infant Jesus stands in contrast to the towering basilica backdrop, where Abraham, Jesus carrying a lamb, and Mary appear in the reliefs.

“It was as though one were viewing the life of the Blessed Mother from beginning to end, where she is ultimately crowned Queen of the Universe,” the visitor said.

Father Aarons also reflected on that juxtaposition. “I see Jesus offering Himself as the Lamb of God there. This is what we see, ‘Behold the Lamb of God who takes away the sins of the world.’” (Jn 1:29)

As the rector was interviewed, a pilgrim stopped, stared at the sculpture, then reverently gave a deep bow. That intense awe is what the sculpture provokes.

The original Monument to Life is permanently installed at the Church of San Marcello al Corso, in the center of Rome. Monument to Life will remain at the Basilica for roughly two months before making its way to St. Augustine and other cities, before permanently residing in Washington, D.C.

By Glenda Meekins of the Florida Catholic staff, January 12, 2023