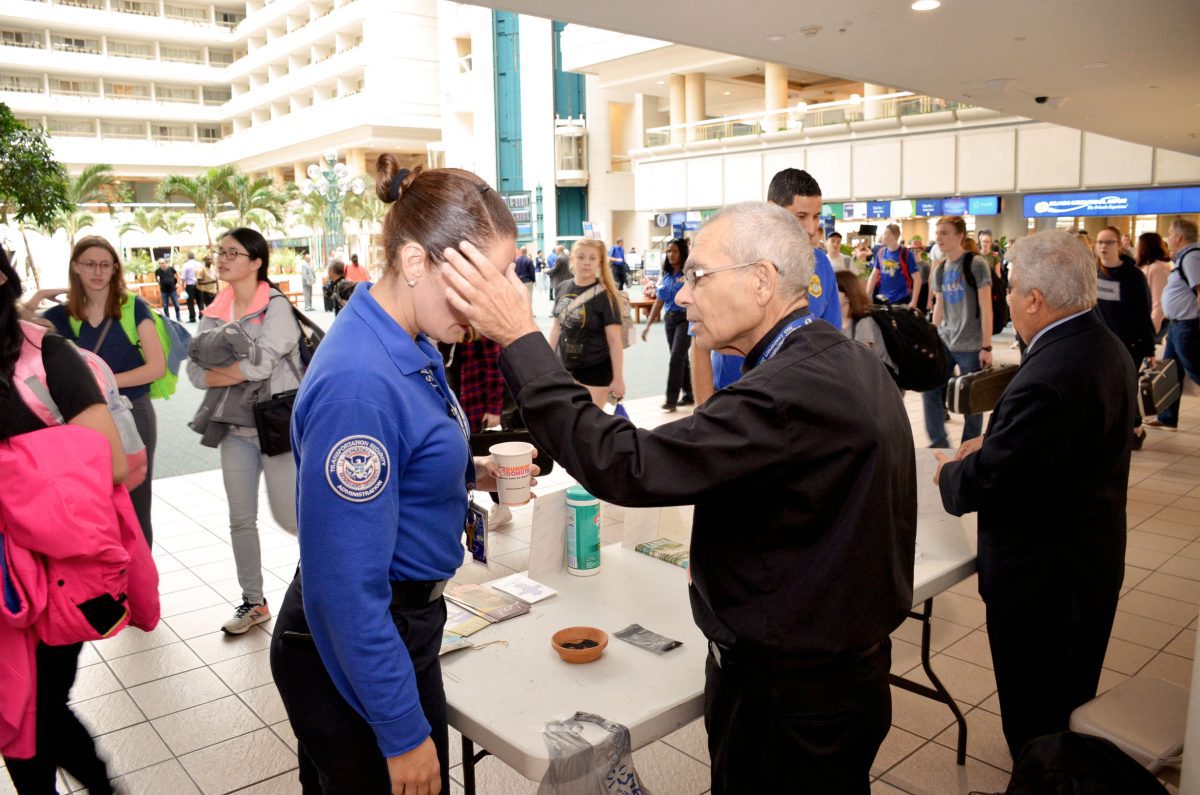 ORLANDO | In exuberant fashion, firetruck hoses showered water over a Southwest Airlines airplane Oct. 31, 2022, in tribute to Missionaries of Our Lady of La Salette Father Robert Susann, Orlando International Airport Chaplain for the Diocese of Orlando for 19 years.

After a vocations’ retreat his senior year in high school, Father Susann, knew he “wanted to make a difference in the world.” And he did. For nearly 20 years, Father Susann spent most of his time in Orlando International Airport, greeting travelers and employees, consoling them, and ministering to them for a moment or an hour — the face of Christ among the crowd.

Even as he departed, Father Susann stayed true the mission of the National Catholic Conference of Airport Chaplains: “to teach and witness to the Word of God and to serve His people by fostering their growth and renewal through prayer, study and Catholic service for airport personnel and travelers.”

Missionary of Our Lady of La Salette pastor Father Roland Nadeau, of Holy Cross Parish where Father Susann lived, summed his friend up well. “He was a man who wanted to stay in the vineyard and work for the Lord to his very last day, if he could. Despite his disability (from a prior stroke), he was able to amass a record of fidelity and a wealth of service at this airport,
one of the busiest in the country,” he said.

The only airport chaplain to serve the Diocese of Orlando, Father Susann returned to the roots of his order, in Hartford, Connecticut, Oct. 31, after a recent heart attack. In his final days in Orlando, he still guided and consoled airport employees who flocked to visit and tell him how much he would be missed.

He was so beloved that in 2013 Father Susann was honored by the board of directors of the Greater Orlando Aviation Authority for his years of dedication, service, and ministry. It was the highest award given to employees — even though the chaplain was a volunteer. For him, it was a ministry of love for everyone from Disney tourists to those traveling to or from a funeral.

The Diocese of Orlando airport ministry was born in the mid-1980s. Intrigued, Father Susann requested consideration from then Bishop Norbert Dorsey. After extensive interviews with the Diocese of Orlando’s head of tourism, Msgr. Joseph
Harte, and the Greater Orlando Aviation Authority, Father Susann was chosen for the job. So, after 13 years as pastor of St. Anne Parish in Marietta, Georgia, he headed to Blessed Trinity Parish in Orlando where he made a new home with fellow La Salettes.

Father Susann then headed to O’Hare International Airport in Chicago for training. At the time there were 37 airport chaplains in the U.S. Today, there are about 50 Catholic airport chaplains working in 30 airports around the nation.

“I liked being able to help people find the Lord and help them in difficult times,” Father Susann said. “I talked to people and tried to help them realize that the Church is here for you. When they saw the collar, it really made a difference,” he explained. Often those who were traveling to care for a sick relative or because of a funeral would stop and ask for prayer, blessing, or
simply consolation. Father Susann estimates at least 20% of travelers fly due to bereavement.

He noted, “There are two types of people to minister to, the workers and the visitors, people that are flying. It’s a ministry that sometimes only takes a moment to bring them to the Lord because you don’t have too much time.”

He recalled one day entering the chapel at 5:30 a.m. and finding two young women crying. He thought surely they had lost a loved one. Upon inquiring he discovered the two students from the University of Scranton, Pennsylvania, had a terrible fear of flying. They asked him to pray with them. He did. Calmed by his presence, they took their flight and arrived safely at their destination.

Other times, he heard the confessions of travelers feeling the safety of anonymity. Yet much of his ministry was caring spiritually for the 17,000 airport employees. Whether his chapel was in the Hyatt Regency, as it first was, behind Terminal A security, or in its current location in the new Terminal C which is more visible, Father Susann could be found speaking with vendors and airport staff, building close relationships. He frequently went to their families’ funerals, comforting relatives and friends. He leaves behind many inconsolable by his departure.

Among them is Jay William Chase. The terminal operations employee met Father Susann on the job and offered to assist him in
displaying the rosary and placing the Sacramentals on the altar.

“Father is my number one,” he said. “We met over many occasions for coffee. He has helped me and (gave) me advice on personal issues. He’s very respectable and very honorable. Many people at the airport just don’t like him, they love him. He’s a slow walker, but he makes sure he gets all over the airport and spends time to see how everybody’s doing each day when he’s
there.” Chase testifies Father Susann cares more for others, than he does for himself.

Pondering Father Susann’s departure, Bishop John Noonan described him as “a guardian angel” noting he had “wings”. “He was always flying. He was our everything for everybody at the airport — our St. Francis of Assisi, our St. Vincent de Paul. And not just for the travelers, but for the staff too.” He acknowledged the cherished priest will be hard to replace.

By Glenda Meekins of the Florida Catholic staff, November 03, 2022