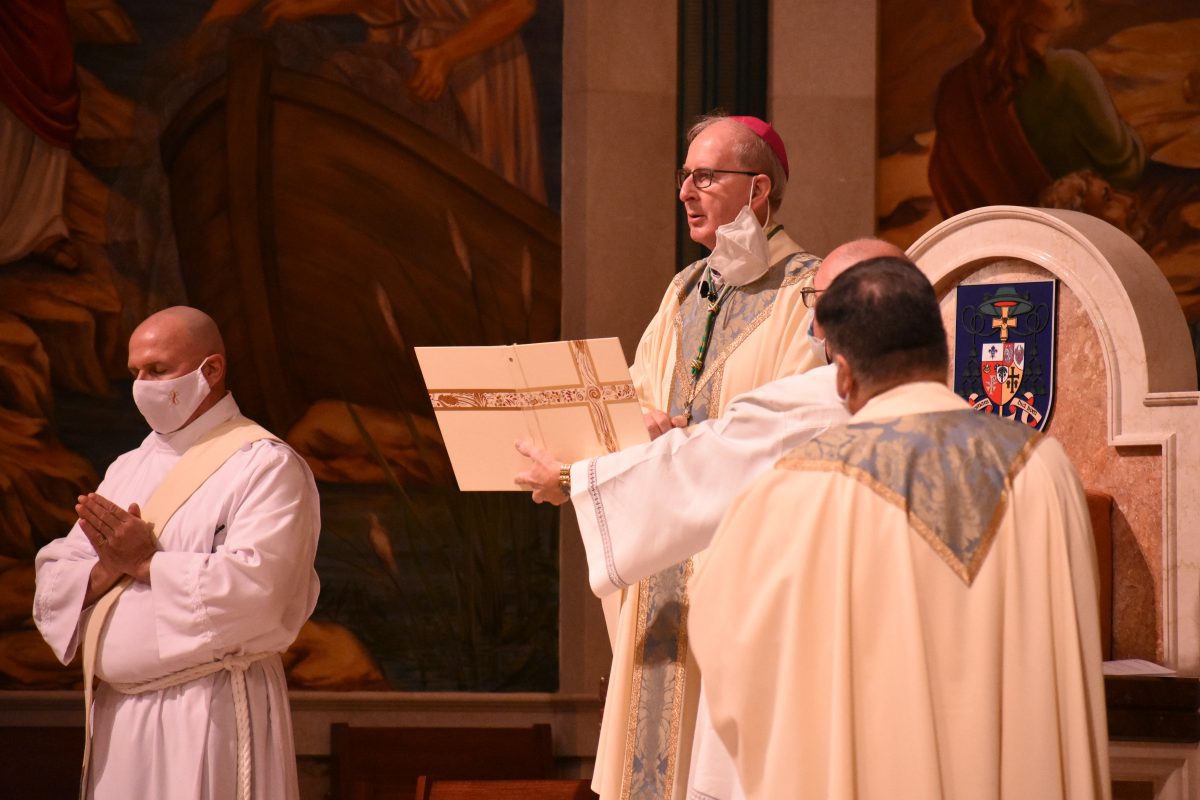 And now, bless the God of all,
who has done wonders on earth;
Who fosters growth from the womb,
fashioning it according to his will!
Sirach 50:22

My Sisters and Brothers in Christ,

In the first week of the new year, four people I knew died. Two were priests, one was a religious sister, and one was the father of the Superintendent of our Catholic Schools. None of them, to my knowledge, died of COVID. I would characterize their deaths due to running a good race to the glory of God.

On January 21, I celebrated a Mass for Life at 12:10 p.m. at St. James Cathedral and we began a Novena for life throughout the Diocese. The Novena, 9 days for life, is to pray for the protection of human life and to build the culture of life within our world.

The four people who died lived their lives teaching the people they encountered about the gift of life from conception through natural death. The father of nine children, Mr. Fortier, and his wife spent their days teaching their children about the importance of life. They devoted their time and energy to raising their children and sacrificing many personal and financial comforts for their benefit. The Catholic parish in which Mr. Fortier was formed became his own family’s parish.  He was a man of internal prayer and his spirituality filled the daily living of his family.

Luiz Bastos converted from Judaism to Catholicism and became a priest. His family rejected him because of his conversion. At an early age he became ill and spent most of his years suffering from illness.

The Catholic formation provided by her Irish family led Sister of Notre Dame de Namur Teresa McElwee to spend her years advocating for the meek and lowly. Filled with enthusiasm for God’s working poor and social justice initiatives, Sister Teresa was a trailblazer in providing for housing, financial stability, and family connectivity for migrant workers.

Father Eamon Tobin was instrumental in encouraging the spiritual growth and prayer life of Catholics throughout the Diocese of Orlando, and presented numerous programs and retreats over the years on these topics. Compassion and mercy of the Lord was the soul of Father Tobin as he served parishioners of all ages throughout his priesthood, and for the people of God everywhere. He maintained outreach programs to the poor, the sick, the bereaved, and was active in inviting non-practicing Catholics back to Mass. He was dedicated to respecting the life of the unborn. He believed in the importance of missionary work.

These fabulous four took seriously the image of God bestowed upon each one and lived expounding upon God’s gift of life, inwardly and outwardly. They were not afraid to point out an injustice, whether it was one at conception or at some point during the living years of each person. Each one knew that God does not call us to perfection of appearance or abilities, but to perfection in love. Christ invites us to embrace our own lives and the lives of others as true gifts. They were the arms of Christ, embracing and living His commandment to “love one another as I have loved you.”

Evangelium vitae (The Gospel of Life) was written to reaffirm the value and inviolability of every human life and to appeal to all people to respect, protect, love, and serve every human life.

When God fashioned the human person in His own image and likeness, He destined us for eternal life with Him. When we allow sin to find a place in our hearts, we become blinded to the truth. Sometimes this blindness might be so deep that we fail to recognize the undeniable humanity of each person. We see this today in small ways when we choose not to wear a mask and in larger ways when we bully each other via social media or even participate in the violence of destruction with our fists or our words or our negligence. But we know that “life, especially human life, belongs only to God: for this reason whoever attacks human life, in some way attacks God himself” (EV 9).

I invite you to pray a prayer authored by Pope Francis, A Prayer to the Creator:

Lord, Father of our human family,
You created all human beings equal in dignity:
Pour forth into out hearts a fraternal spirit
and inspire in us a dream
of renewed encounter, dialogue, justice and peace.
Move us to create healthier societies and a more dignified world,
a world without hunger, poverty, violence and war.

May our hearts be open to all the peoples and nations of the earth.
May we recognize the goodness and beauty
that you have sown in each of us, and thus forge bonds of unity,
common projects, and shared dreams. Amen.

May God grant us joy of heart and may peace abide among us.

During Respect Life Month, the USCCB usually celebrates this Mass in conjunction with other activities. In light of COVID-19 precautions, bishops around the nation celebrated a Mass in their diocese. In conjunction with the Culture of Life Office at Catholic Charities of Central Florida, the diocese begins the 9-day novena.

Click here to watch the livestream of Mass for Life.